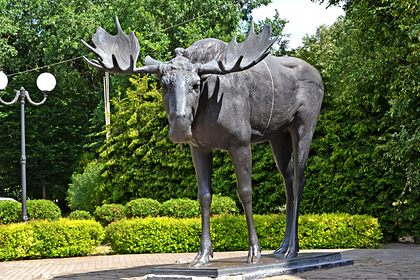 A resident of the Chelyabinsk region Vitaly Orekhov whom Valery Rashkin, a State Duma deputy from the Communist Party of the Russian Federation, killed during the hunt. The Russian citizen's appeal is addressed to the Governor of the Saratov Region Valery Radaev, URA.RU reports.

The author of the initiative posted a petition on the change.org portal. He explained that the monument will symbolize a protest against illegal hunting and support for the country's natural wealth. “The monument should be installed in the place where he gave his life for the sake of other people's greed and greed. Let the life and death of an unnamed moose not be in vain, “Orekhov noted.

The activist clarified that the damage from the death of an animal can be estimated from 240 to 400 thousand rubles. As another argument, Orekhov cited the fact that due to the death of an elk, the offspring of the animal was orphaned. As a result, the author of the appeal called on the Saratov region to become a locomotive in the fight against illegal hunting.

In October 2021, a police officer and an employee of the local hunting committee stopped Rashkin's car in the Saratov region. A dead elk was found in the trunk of the deputy. As a result, a criminal case was opened against him under the article on illegal hunting in the region. Soon Rashkin confessed to killing the animal.