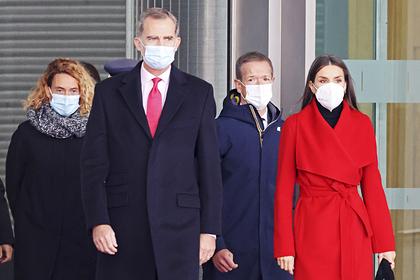 Queen Letizia of Spain came out in an old coat four years ago. The corresponding photos are published by the Daily Mail.

The 49-year-old celebrity appeared in public with her husband King Philip VI at the Adolfo Suarez Madrid-Barajas International Airport to go on a two-day trip to Sweden. Laetitia wore a red fitted coat from the luxury brand Hugo Boss, a black turtleneck sweater and cropped wide leg pants.

The image of King Philip VI's wife was complemented by gold earrings, a ring, black gloves and leather boots with heels. The woman's hair is loose and her face is wearing nude makeup.

According to the material, Laetitia first wore a Hugo Boss coat in 2017 at a meeting with the Spanish Association Against Cancer (AECC).

< p> In September, the Queen of Spain appeared in public in a 40-year-old dress that had previously belonged to her mother-in-law, Queen Sofia. The celebrity came out to welcome the President of Chile to Madrid. She wore a beige short-sleeved midi dress with floral embroidery and a flared skirt. Queen Sofia first wore the described outfit in 1981 while traveling in Italy.