Russian family stuck on a yacht: we were escorted by radio despite a request for help 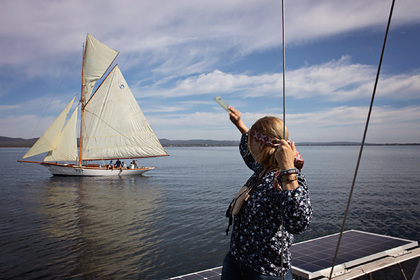 autonomous navigation for more than three months, they were not allowed to replenish supplies to Christmas Island. The details of the situation were revealed by the journalist, documentary photographer and close friend of the Klochkov family, Yulia Galushina, who spent more than a year on the Lady Mary yacht. Her message appeared at the disposal of Lenta.ru.

Trapped in the middle of the ocean, the Russians told a friend that they requested an emergency stop on the island a few days ago. “According to the maritime legislation, every vessel in any country of the world has the right to it,” said Marina Klochkova, the captain's senior mate. However, the authorities denied their request, despite the family being isolated in the ocean for more than 80 days.

Later, the Klochkovs anchored, despite the ban, to repair the yacht, and hoped that the island's government would allow them to at least replenish their water supplies. “To be more convincing, they said that we would die without their help, and we would not reach the next country (which is just as closed) on our reserves. After persuasion, the owners asked how much water we needed and whether we had cash, disappeared and later escorted us out by radio, ”the travelers shared.

The Russians noted that at the moment there are enough supplies of food and fresh water on the yacht, the team is well prepared for long journeys. “We knew that most likely we would not be able to land on any shore in the next six months, but we could not help but go: by the spring we need to be home,” they specified.

Nevertheless, the sailors added, that they need to find a place where they can fix the watermaker and refuel. “If we cannot solve the problem on our own, we will involve the embassy. Water and fruit are critical. If the desalination plant is repaired, the journey home – three months across a closed ocean – will be less risky, “the Klochkovs explained.

Earlier in November, it became known that a family from Novosibirsk was stuck on a yacht in the open ocean while traveling around the world due to covid restrictions. As the son of the navigator Fyodor Konyukhov, Oskar, said, the Klochkovs have been sailing autonomously for more than 70 days, since no country can accept their boat for security reasons. He also clarified that sailors are now heading to French Polynesia in the hope that they will be allowed to moor there and resupply.

The Klochkov family has been making a round-the-world trip on the Lady Mary yacht for more than two years. Their crew consists of four people – Captain Andrey Klochkov, his wife and senior assistant Marina Klochkova, their daughter and senior sailor Anastasia Klochkova, as well as 10-year-old cabin boy Klochkova Lada. For three years, the travelers managed to pass Cape Horn, Point Nemo, Antarctica and the Cape of Good Hope. The fifth stage of their expedition was supposed to end in December 2020, but due to the COVID-19 pandemic, they had to stand in Western Australia for a year and a half, waiting for the borders to open.