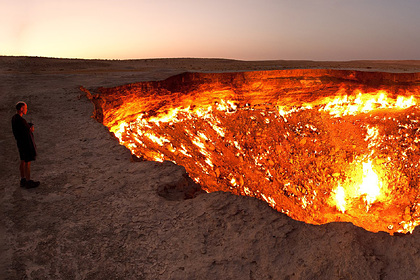 Dashoguz region, the burning gas crater of Darvaza, popularly called the “Gates of Hell”. Chronicles of Turkmenistan reported this with reference to correspondents.

It is noted that earlier residents of the neighboring village of Darvaza often brought guests to the crater of the same name, and in winter shepherds drove herds of sheep to it as to a warmer place.

Now police officers have established posts there and forbade citizens to approach the “Gates of Hell”. They explained such a restriction by possible gas emissions, which, according to them, could lead to poisoning, burns and even sinkholes.

At the same time, the ban does not apply to tourists. They can still visit the attraction, but only in groups and with a special permit from the state tourist corporation “Turkmensyyahat”.

Darvaza crater appeared in 1971 at the site of an underground gas accumulation. Before that, there was an oil rig, but it fell into an underground void. To prevent the gases escaping from poisoning people and livestock, the authorities decided to set fire to the crater. It was assumed that the fire at the field would go out after a few days, but the fuel has continued to burn for 50 years.