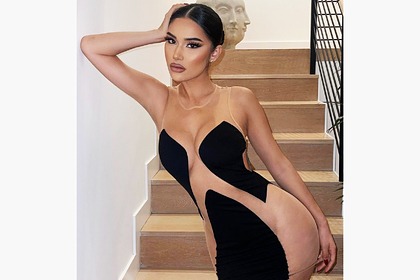 The popular Fashion Nova brand presented a dress of open design and caused controversy among buyers. The corresponding post and comments on the Instagram social network attracted the attention of the Daily Star journalists.

This is a transparent nylon sleeveless Talk of Town mini-dress, partially exposing the model's body, the black inserts of which cover her intimate areas. In the posted frame, a model poses with hair tied up in a bun and makeup in the style of smoky eyes.

It is noted that the cost of the described outfit, which is presented in the retailer's assortment in black and white, is $ 24 taking into account the discount.

Netizens reacted ambiguously to the new thing and began to argue about its design in the comments under the photo. Some considered the clothes too vulgar. “It’s not sexy at all, it’s rather vulgar”, “What nonsense?”, “Since when did it become fashionable to go out on the street naked?”, “Where can you even go in this?”, “Vulgar,” the commentators wrote. p>

At the same time, some users admired the wardrobe item. “I love it!” In October, the overt design of another Fashion Nova outfit pissed off potential buyers. We are talking about a black tight-fitting jumpsuit, which is decorated with an oblong neckline that partially exposes the chest, waist and hip. The cost of a thing on the brand's website, taking into account the discount, is almost $ 38 (2847 rubles).