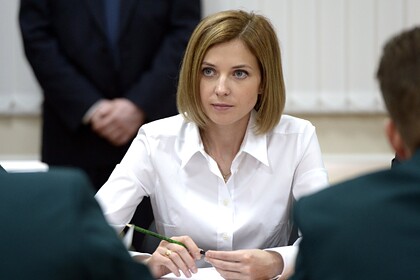 Natalia Poklonskaya starred for the December issue of the glossy magazine Tatler. In the photo published on the website of the edition, the politician is sitting in an armchair against the background of the Kremlin.

The announcement of the article was published under the heading “Confessions of the new Russian ambassador to Cape Verde, Natalia Poklonskaya.” The text says that 41-year-old Poklonskaya is the youngest woman at the head of the Russian diplomatic mission. In addition, it is indicated that the diplomatic mission in Cape Verde is represented by people over 50 years old.

In the photo, Poklonskaya is sitting in a wooden armchair upholstered in red fabric with gold patterns. The diplomat is wearing a dark gray trouser suit and beige and silver Kitten heel shoes. The image of Poklonskaya is complemented by light makeup in nude shades and miniature silver earrings.

The photo was taken in a room overlooking the Kremlin. The blurred outline of the Kremlin walls can be seen through the double window frame.

In late October, Poklonskaya first posted on Instagram a photo of herself in a diplomatic uniform and a white blouse buttoned up.

On October 13, the Russian president Vladimir Putin has appointed Poklonskaya, a former State Duma deputy, as ambassador to the African republic of Cape Verde. Commenting on the new position, she said that she had long dreamed of trying herself in diplomacy.