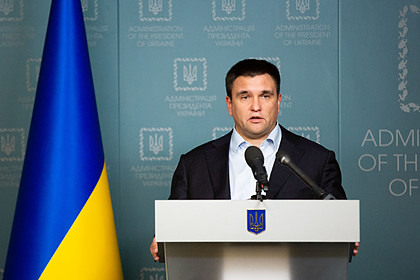 hellish “sanctions against Moscow in the event of a war with Ukraine. He announced this in an interview with the Obozrevatel.

According to the former head of the department, the Americans are discussing with the Europeans the “containment package” of Russian President Vladimir Putin in the event of a “theoretical attack.”

“Hellish sanctions or not hellish – these epithets are not so important to me, as much as whether they work or not. Will SWIFT be disabled or oil imports limited? As of today, I cannot say, but I know that the Americans are discussing this. I cannot say when and what supplies of new weapons to Ukraine will be, but I know that the Americans are also discussing this, “Klimkin said.

According to the Ukrainian politician, Putin” caught the courage “after achieving several foreign policy victories , so Moscow can allegedly resort to “large-scale provocations” against Kiev. Klimkin stressed that the United States and the European Union are “ahead of the curve” and are preparing retaliatory measures.

Earlier, the US Treasury Department imposed sanctions against Transadria and the Marlin vessel associated with Nord Stream 2. The publication argues that the decision was made on the basis of the Protecting European Energy Security Act (PEESA) of 2019.