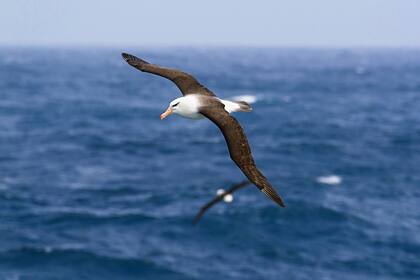 , abandon their partners more often and start homosexual relationships. Experts from the Royal Society called the warming of the water in the habitat the reason for the atypical behavior of monogamous birds. The Guardian writes about it.

Researchers have observed 15 thousand individuals for 15 years that nest in the Falkland Islands. Scientists have noticed that under normal conditions, only one to three percent of pairs of albatrosses part, and in years with unusually warm water, this figure increased to eight percent.

As the ocean temperature rises, birds suffer from food shortages – off the coast there are fewer fish, the hunt lasts longer, and it becomes more difficult to feed the offspring. Against the background of problems finding food in albatrosses, the stress hormone increases and reproductive function decreases – some diverge after unsuccessful attempts at conception.

Climatic changes have also affected the population size – annually since 2005, it has been declining by 5-10 percent. In addition to hunger, this was also influenced by the increased frequency of homosexual relationships, experts say. “On the Antipodes Islands, pairs of males began to form – something like that had not been observed before. Birds have to choose their sex because of the inability to find females, “explained Dr. Graeme Elliot, chief scientific adviser of the New Zealand Department of Nature Conservation.

In addition, due to prolonged hunting, not all birds manage to return back to the mating period, and their partner has to look for another individual. The researchers noted that there are cases when stressed females shift the blame for their condition to the poor performance of the male.

In September, it became known that climate change has affected the behavior of polar bears. To survive in the face of rapid melting of glaciers, animals began to mate with blood relatives more often. According to experts, the dispersal of the population pushed the predators to incest.