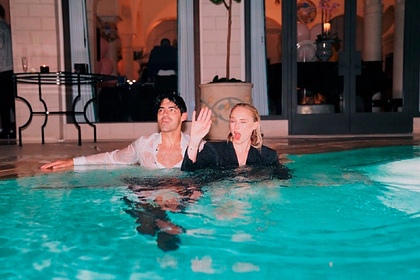 British actress Sophie Turner, star of Game of Thrones , appeared in the Jonas Brothers special on Netflix's Family Roast, dedicated to the Jonas Brothers. The actress made fun of her husband, musician Joe Jonas, for the “ring of purity,” writes the New York Post.

“Look, Joe didn't just stick his finger in some idiotic piece of metal ring. He poked his fingers into co-workers, actresses, even a couple of supermodels, ”Turner joked. The actress noted that the “purity rings” that symbolized the sexual puritanism of the Jonas Brothers were not a good idea.

Sophie Turner and Joe Jonas have been dating since 2016 and got married in early May 2019. In February of the following year, it became known about the pregnancy of the actress. She gave birth to her first child in July 2020.

The Rings of Purity, or Rings of Purity, are a symbol of American Christian groups advocating abstinence from sex until marriage. Such symbols, in addition to the Jonas Brothers, were worn by Miley Cyrus, Selena Gomez and Jessica Simpson.