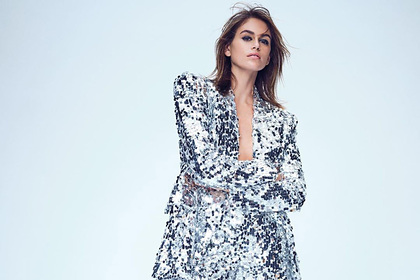 Daughter of American fashion model Cindy Crawford, supermodel posed for the cover of the fashion magazine Elle in revealing images. Photos from the December issue appeared on the edition's Instagram account.

20-year-old Gerber took part in the shooting, the author of which was star photographer Nathaniel Goldberg. In the first photo posted on the social network, the model is captured in an unbuttoned Azzaro jacket, embroidered with sequins, and in the second, in a Miumiu dress made of transparent fabric with Swarovski crystals, through which her naked breasts are visible. In the third shot, the celebrity is dressed in a black pantsuit and transparent bra of the creative director of Saint Laurent Anthony Vaccarello.

In addition, Kaia Gerber became the heroine of the cover of the latest issue of Elle. On the front page, she poses in a black mesh Saint Laurent bodysuit with a voluminous blue feather collar and an Omega watch.

In October, the model walked the streets of New York in a revealing outfit and became the subject of online discussion. The paparazzi captured Gerber and her beloved Jacob Elordi on their way to a party after the Met Gala. The celebrity went public in a black sheer mini dress without underwear.