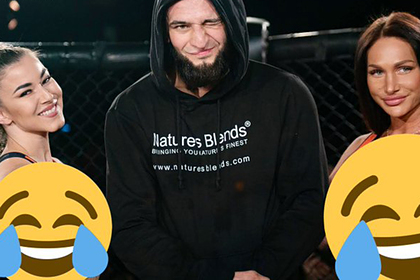 The 27-year-old Chechen shared a photo of Stefan Romare, a photographer and journalist. In the original photo, Chimaev poses in an embrace with two ring girls. On Twitter, a Chechen fighter covered the girls' bodies with giant emoticons. “No ring girls!” – he added in the description.

Chimaev is known for his performances in the Absolute Fighting Championship (UFC). The Chechen won four victories in four fights in the promotion. He is compared to the Russian Khabib Nurmagomedov, paying attention to the aggressive style of fighting and the desire to transfer the opponent to the ground.

Nurmagomedov is a former UFC champion. He completed his performances in MMA, after which he was marked by an ambiguous statement about ring girls. According to the Russian, they are useless in MMA. Many fighters publicly disagreed with his opinion.