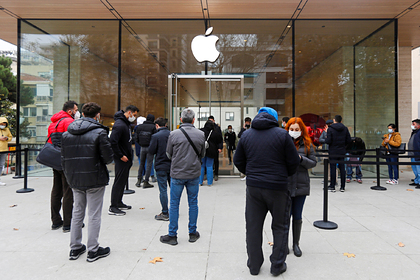 shop. According to RIA Novosti, this decision was made against the backdrop of a sharp drop in the lira.

Due to the depreciation of the national currency, Apple products have become cheaper in the Turkish market than if they were privately imported from the United States. The selling price of Apple products in Turkey includes several taxes and fees that significantly increase the final cost to the consumer. Because of this, many citizens bring Apple products from abroad, including the United States, or order them through acquaintances – in the case of the iPhone, this is 35 percent cheaper compared to buying a phone in Turkey. But now, due to a sharp drop in the lira, the total cost of many Apple products has become lower than in the United States.

Currently, purchases on the Apple website are not available for Turkish citizens – it is impossible to put a single product in the basket. Apple is expected to resume sales after raising prices for all products in line with the dynamics of the exchange rate to compensate for the fall in value due to the collapse of the lira.

The Turkish currency began to fall after the key rate cut from 16 to 15 percent at record inflation rates. Turkish President Recep Tayyip Erdogan promises to further reduce the key rate, as he believes that this will help contain the rise in prices. The fall of the national currency did not shake the confidence of the head of state – in mid-November, Erdogan said that the chosen tactics were correct. On November 24, the lira rose slightly to 11.58 lira per dollar, but then returned to the previous rate. Experts linked the temporary growth with Erdogan's meeting with the Crown Prince of Abu Dhabi, as well as with the sale of dollars by Turkish state banks.