“BBC”: in Spain from under the water appeared the village of Aceredo, flooded dozens ago 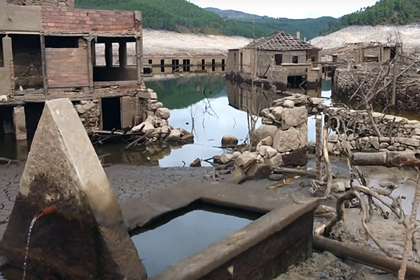 In Spain from- under the water appeared the village of Aseredo, which was flooded several decades ago due to the closure of the hydropower plant locks. This is reported by the BBC.

The position of the ghost village was threatened in 1968 by an agreement between Spain and Portugal on the common use of the Lima River for the construction of the Lindoso Dam. As a result, by 1992, the Portuguese side closed their locks, and Aceredo was under water.

There were 70 houses in the village, a total of about 120 people lived there. When the parties struck an agreement, the Portuguese hydroelectric company EDP offered money to locals to relocate, which sparked discontent and in some cases led to hunger strikes. As a result, the population of Aceredo was persuaded to leave the village.

According to the service, the village is periodically shown from under the water when the water level in Lima drops. Most of the houses have turned into ruins – their walls have collapsed, window frames have been emptied, and the rubble of buildings is mixed with the personal belongings of residents who have left. However, some buildings were hardly damaged by the water.

In May 2021, the Italian village of Curon in South Tyrol appeared from under the water of Lake Lago di Resia. It ceased to exist in 1950 when the local authorities decided to build a dam and connect two neighboring lakes into a single reservoir. As a result, water flooded more than 160 houses.