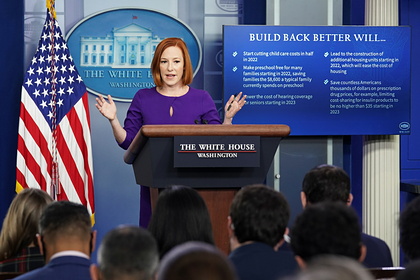 White House spokesman Jen Psaki said the US maintain close contact with the Ukrainian authorities. Her words on Wednesday, November 24, are quoted by TASS.

However, she did not confirm reports of additional military assistance to Kiev.

Earlier, Minister of Defense of Ukraine Oleksiy Reznikov said that the intelligence agencies of Ukraine, the United States and the UK exchanged information on Russian actions near the Ukrainian borders. According to him, the exchange took place during his meeting with British Defense Ministers Ben Wallace and US Defense Ministers Lloyd Austin in Washington.

On November 23, Psaki answered a question about a new meeting between US President Joe Biden and Russian leader Vladimir Putin. According to her, so far there is nothing to report on plans for a meeting or contacts between the two leaders of the countries. At the same time, she noted that Washington remains seriously concerned about the activity of the Russian military near the borders with Ukraine.