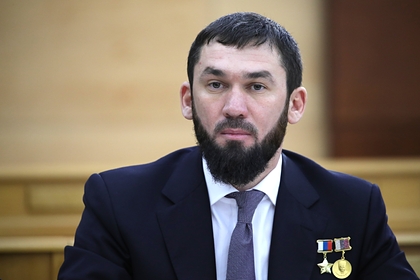 Speaker of the Chechen Parliament Magomed Daudov Ingushetia did not come to the bank of the Fortang River in order to resolve the issue of land ownership in accordance with Sharia. He published the video on his Instagram page, the translation from the Chechen language is quoted by the “Caucasian Knot” publication ( included by the Ministry of Justice in the register of organizations performing the functions of a foreign agent ).

According to Daudov, for three hours – from 11 am – he was waiting for the council representatives at the Fortanga River, which flows on the border between Chechnya and Ingushetia. “Some people were talking, I thought they were the masters of their words, so I came here. The time was agreed 10-15 days ago, the place was also agreed. The topic is also not petty, Sharia court. When offered, they agreed. The time was allocated from the moment we do the lunch prayer [about 12:15 Moscow time], until the afternoon prayer [about 13:53 Moscow time]. It's already ten or eleven minutes since it was time for the afternoon namaz, ”complained Daudov, filming the river bank.

The day before the trip to the border, an associate of the head of Chechnya, Ramzan Kadyrov, also said that the Ingush side had long wanted a Sharia court, “for three years now, and now Ramzan said – let's go.”

It is clarified that the Chechen delegation arrived at the shore of Fortanga in the composition of several people, including the Mufti of the Chechen Republic Salakh Mezhiev. Daudov said that the border issue had already been resolved with the government of Ingushetia and in the Constitutional Court. “Even in spite of all this, do you think there is any reason for what you are saying? If you yourself called the Chechen people to the Sharia court, and the Chechen people are the highest representative body, parliament, and from the side of religion – the mufti, then you had to come. What, being unprepared, did you invite the Chechen people to the Sharia court? ” – Daudov addressed the Council of Teips of Ingushetia in absentia. He also added that he knew no one would come to the meeting.

A new land dispute between the regions began after people in Ingushetia were outraged by reports of repair work in the Ingush settlement of Dattykh, Sunzhensky District, bordering Chechnya. Netizens called what was happening as another provocation of neighbors. In response, the head of Chechnya threatened that he could take away by force from Ingushetia the lands “illegally transferred [by the first president of the self-proclaimed Chechen Republic of Ichkeria Dzhokhar] Dudayev.” According to Kadyrov, if the Ingush want to live on Chechen lands, they will be leased. Daudov confirmed Kadyrov's threat, noting that, in his opinion, the Ingush side is engaged in provocations.

In response, the Council of Teips of Ingushetia published the “last statement of the organization” on the issue of the border between the regions and stated that the issue should be resolved according to Sharia law. According to council members, Daudov's proposal to come to Fortanga and swear on the Koran does not comply with Sharia norms.

In 1993, Dudayev and the first President of Ingushetia Ruslan Aushev concluded an agreement according to which the Sunzhensky region, with the exception of the settlements of Sernovodsk and Assinovskaya, went to Ingushetia. However, the final demarcation of the border did not take place, and in 2012 Ramzan Kadyrov asked the federal center to establish an administrative border with Ingushetia. In September 2018, the then head of Ingushetia, Yunus-Bek Yevkurov, and his Chechen counterpart, in the presence of Aleksandr Matovnikov, then the representative of the President of Russia in the North Caucasus Federal District, signed an agreement on the establishment of the border. In accordance with the document, Chechnya handed over to Ingushetia a part of the Nadterechny region – a mountainous and wooded area. Ingushetia, in turn, transferred to Chechnya an equivalent territory on the border with the Malgobek region.