Russian embassy in Bulgaria: there were no Russians among those killed in the bus accident 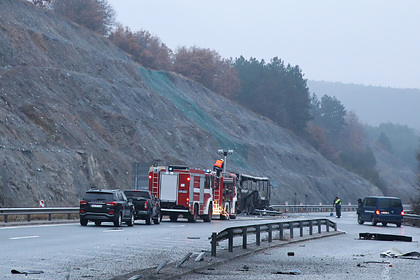 a bus that got into an accident in Bulgaria near the village of Bosnek in the Pernik region. This is reported by the Russian Embassy in Sofia, TASS reports.

“In connection with the tragedy, we asked the Ministry of Internal Affairs, according to preliminary data, there were no Russians on the bus that had an accident,” said the head of the consular department Embassy of the Russian Federation Vladimir Chertkov.

Earlier, the head of the Ministry of Internal Affairs of Bulgaria Boyko Rashev admitted that he was horrified by the picture of the consequences of an accident, which killed more than 40 bus passengers. “Not everyone can endure this sight. I've never seen anything like it. It is even difficult to understand how many people were burned there, “the minister said.

The accident occurred on the night of November 23. The 52-passenger bus was heading from Istanbul to North Macedonia. When the accident happened, the car caught fire, killing 46 people, including 12 children.