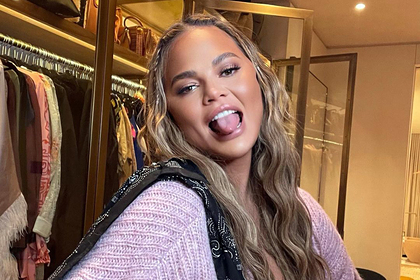 The 35-year-old celebrity told in her Instagram stories that she underwent an eyebrow transplant. Teigen admitted that as a teenager, she regularly plucked them, as a result of which they thinned and lost their shape. Because of this, a woman often had to tint her eyebrows with decorative cosmetics.

So, the model showed her face before and after the procedure: the frames show that her “new” eyebrows have become clear, dark and thick. “I almost never use makeup unless the occasion requires it, so I was very excited before the operation. It turned out a little darker than usual, but now I have eyebrows! Teenagers, do not pluck them, as I did in my time, “she signed one of the publications.

Journalists of the publication drew attention to the many negative comments about Teigen that flooded Twitter. Users considered the story of a star's eyebrow transplant inappropriate against the background of the fact that many people live on the brink of poverty.

“Hell is happening in the world, but thank God that Chrissy Teigen was at least able to transplant eyebrows!”, “Here what happens when there is nowhere to put the money ”,“ Yesterday I saw the headline of the article that Chrissy Teigen had an eyebrow transplant. What am I? I'm trying to make ends meet ”,“ People have bigger problems. I don’t have eyebrows either, but I don’t care, “they gloated.

In December 2020, Chrissy Teigen showed a new haircut and reminded fans of the heroine of the series from the 90s. The model added light strands to dark blond hair, cut their total length to shoulder level, and also made bangs that frame the face. Fans of the model began to compare her with Rachel Green from the TV series Friends, which was especially popular in the 90s.