Bulgarian Interior Minister Boyko Rashev: it is difficult to understand how many people were burned in an accident with a bus 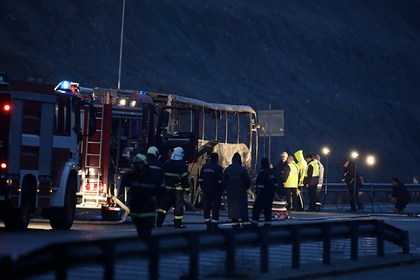 Bulgarian Interior Minister Boyko Rashev admitted that he was horrified a picture of the consequences of an accident, in which more than 40 passengers of the bus were killed. RIA Novosti reports.

“Not everyone can endure this spectacle. I've never seen anything like it. It is even difficult to understand how many people were burned there, ”the minister said. He also assured that a detailed investigation will be carried out into the accident with dozens of victims.

The accident occurred on November 23 at 3 am, near the village of Bosnek in the Pernik region. The 52-passenger bus was heading from Istanbul to North Macedonia. When the accident happened, the car caught fire, killing 46 people, including 12 children.