Kremlin: Putin, Aliyev and Pashinyan will hold trilateral talks on November 26 in Sochi 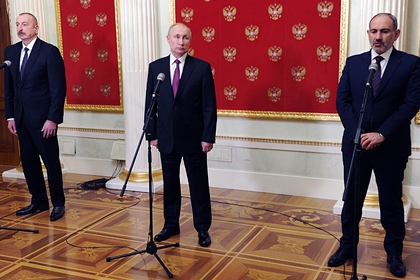 It is specified that the meeting will be held on the initiative of the Russian leader. It will be timed to coincide with the anniversary of the signing of the ceasefire declaration and all hostilities in the Nagorno-Karabakh conflict zone on November 9, 2020. Also on this day, Vladimir Putin will hold separate talks with Ilham Aliyev and Nikol Pashinyan.

During the talks, it is planned to consider further steps to strengthen the stability of peaceful life in Nagorno-Karabakh, as well as to pay attention to the restoration and development of trade and economic and transport links.

Earlier, Vladimir Putin and Nikol Pashinyan held a telephone conversation and discussed the current situation in Nagorno-Karabakh. At the same time, the Prime Minister of Armenia thanked the Russian leader “for active mediation efforts” in the framework of a peaceful settlement. In addition, politicians discussed the stabilization of the situation in the region.