In the city of Kola, the Murmansk region, traffic on a new bridge across the Tuloma river has opened 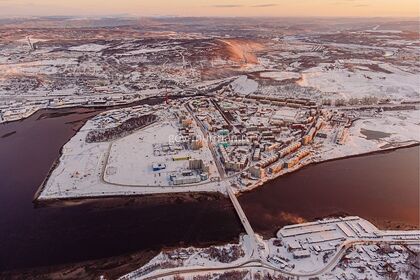 Governor of the Murmansk region Andrey Chibis across the Tuloma river in Kola. This was reported to “Lente.ru” in the press service of the regional government.

The first to cross the new bridge were the governor and the director of the Murmansk branch of the Uprdor “Kola” PKU, Andrei Alyapkin, who took the job. The newly built bridge is over 190 meters long and about 15 meters wide. It includes two lanes, safety lanes and sidewalks. The structure is made of steel-reinforced concrete and placed on four concrete supports. The bridge is equipped with lighting, decorated with architectural and artistic lighting.

“We are very active in the road network. Over the past two years, 2.8 million square meters of asphalt pavement have been renovated. And we were busy with bridges. Thanks to colleagues from Rosavtodor – the bridge across the Tuloma River is very important, it shortens the transport chain to Prichalny and Tuloma, which is very important for these settlements. This year we completed the repair of the bridge over the Umba River, last year – the bridge in Teriberka. We are attracting both federal and regional funds to deal not only with roads, but also with the repair of bridges – this is our program, ”said Andrey Chibis.

The head of the region also noted that the illumination of the bridge turns it into a real decoration of Cola. “It’s a very good example, when not only a building is being built, but everything is being done beautifully, it’s very nice to see. Many thanks to the road workers, builders of Rosavtodor and our Uprdor Kola subdivision for the quality work done! “, – said the Governor.

“This year we focused on bridges; about 350 million were allocated for these purposes. The bridge over the Umba was repaired, the work on the overpass on the Zapolyarny – Salmijärvi highway was practically completed, and the reconstruction of the bridge over the Martimyavr river was started. Next year, we plan to further increase the amount of funding that we direct for these purposes. The plans are to complete the repair of the bridge across Martimyavr, work on the bridge in Lovozero, carry out a comprehensive repair of the bridge across the Keti River, “said Deputy Governor of the Murmansk Region Yuri Serdechkin.

The need to build a new bridge in Kola arose in 2019, when the old structure – an arched steel bridge erected in 1952 – ceased to meet modern requirements and was deemed unrepairable. Car traffic on the bridge was stopped, after which, as a result of a unique technological operation, it was moved to the side and for some time was used as a pedestrian. At the same time, the construction of a new crossing began. The complete dismantling of the old bridge was completed in 2021.