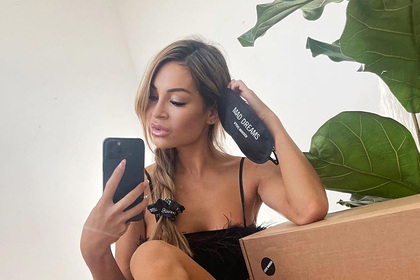 British TV star and blogger AJ Bunker from mimic wrinkles with Botox and visually aged. Her story is quoted by The Sun.

The 28-year-old hair extension specialist took part in the reality show Love Island, where she was constantly rejected by young people in romantic relationships. The girl decided that the reason for her failure was thin wrinkles under her eyes, and spent a thousand pounds (96 thousand rubles) on injections of filler into her cheeks and lips.

“After the first procedure, I could not stop and kept thinking:“ I need more and more ”. I hoped I would find a rested face. As a result, I spent a lot of money, and everything only got worse, ”she admitted and said that she had visited the cosmetology clinic three times within one month. In an interview with the publication, professional cosmetologist Ahmed El Muntasar explained that the blogger's cheeks were swollen due to the incorrect introduction of the filler.

Bunker also complained that after filming in the next season of the show, a lot of user comments appeared on Twitter, criticizing her appearance. “They wrote:“ She’s blown up, ”“ She’s so fake, ”“ Looks like an old woman, ”“ She is a good mother for the other participants. ” But I agree with their opinion. In the promo videos, my face looked disgusting, “she said.

Dr. Mintasar removed the fillers from Bunker's face this fall. After that, the heroine of the material urged readers to avoid such injections as much as possible. The blogger said that she would never resort to Botox again in her life.

In September, another girl injected with Botox for rejuvenation and also grew old. 21-year-old Ceris Tobin showed her face before the procedure. The footage showed that the girl's skin was covered with wrinkles in the forehead and around the eyes. Then she showed herself on the first, third, tenth, 18th and 21st days after the injections. Netizens criticized Tobin's appearance and said the procedure “made her ten years old.”