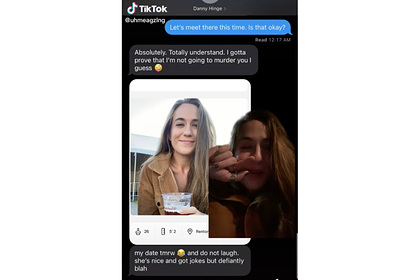 Blogger with the nickname @uhmeagzing on the eve of the date received an unexpected message from the guy. The young man made a mistake in the chat and accidentally sent her a text in which he spoke unflatteringly about the girl. After the interlocutor revealed his true thoughts about her to the blogger, she canceled the meeting. Many TikTok viewers supported @uhmeagzing and found the guy's behavior illogical.

In her video, the author of the post published part of the correspondence in the dating application Hinge with a boyfriend Danny. According to the screenshot, the young people made an appointment, and the failed boyfriend at first made a strange joke about the upcoming event. “Looks like I’ll need to prove that I’m not going to kill you [on a date],” he wrote.

Followed by @uhmeagzing received a message from the guy in which there was a photo of her. The message was intended for another person, Danny sent it to the wrong chat by mistake. “I'm going on a date with her tomorrow,” the guy wrote, adding an emoji of a laughing man. – And don't laugh. She's sweet and humorous, but definitely not. ” The girl did not show the continuation of the correspondence in which she criticized her appearance.

In the comments to the video, many viewers were indignant at Danny's words and began to compliment the author. “But you're attractive. Does that guy need glasses or lenses? ” … Tiktokersha said that the next day after receiving the offensive message, she wrote to the interlocutor that she was refusing to meet. The gentleman read her message and did not reply to her anymore.

Earlier, another blogger shared a story about her unsuccessful date. The man did not come to the meeting and lied to her. He also threatened the girl with legal action if she published his voice messages on social networks.