On the first day of validity of QR codes in Tatarstan, 2,400 people were not allowed into transport 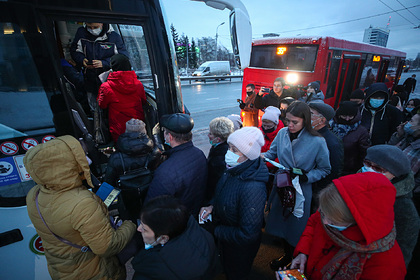 On the first day of validity of QR codes in Tatarstan, 2.4 thousand people could not get into the transport. This is how the Minister of Transport and Roads of the Republic of Farit Khanifov assessed the measure that had begun to operate, RIA Novosti reported his words.

He noted that 2,289 people were not allowed into transport in Kazan, and 190 in Naberezhnye Chelny.

“As of yesterday, 2,289 people were identified and not allowed into public transport in Kazan without QR codes, which is 0.57 percent of the number of passengers carried,” Khanifov said.

The minister added that the police had to be called 17 times to resolve conflicts in transport. According to him, the volume of traffic in Kazan on November 22 decreased by 25 percent, and in Tatarstan – by 18 percent.

QR codes in public transport in Tatarstan must be presented from November 22. The region became the first entity to announce such measures. Documents are also checked when selling tickets.