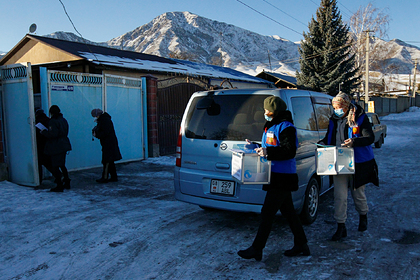 November 28. An appeal to Russian organizations and companies was issued by the country's embassy.

According to Kyrgyz diplomats, the upcoming elections to the country's legislative assembly are of great political importance for the development of Kyrgyzstan, and therefore they ask Russian employers to assist in the implementation of the electoral rights of the Kyrgyz.

And the thunder struck Kirghiz again smashing the house of the government and the prison. Why do elections in the country end in revolutions? 00:01 – 4 August

Fear and hatred in Issyk-Kul. Kyrgyz authorities are betting on nationalism. Will the Russians have to leave the country?

The Kyrgyz do not need to go home to vote. The Central Election Commission of Kyrgyzstan made sure to organize 16 polling stations (PECs) right on the territory of Russia. The plots are located in major cities throughout the country. Six PECs were located at two addresses in Moscow.

In October 2020, the results of the previous parliamentary elections in Kyrgyzstan were canceled due to massive protests that gripped the country after their announcement. Acting Prime Minister Kubatbek Boronov resigned, and the opposition put in his place a new leader, the current President of Kyrgyzstan Sadyr Zhaparov.

On November 28, Kyrgyzstan will hold repeated parliamentary elections. The Central Election Commission of the republic is conducting a large information campaign to attract people to vote. The commission staff separately invited Kyrgyz youth to the polling stations, releasing a video in Russian.