Izvestia: a new rapid test for coronavirus from Rospotrebnadzor will be more accurate 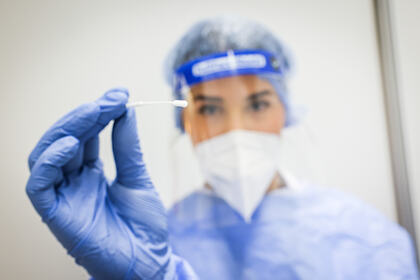 coronavirus. According to Izvestia newspaper, it will be more accurate in the presence of new mutations in the pathogen genome.

According to Kamil Khafizov, head of the scientific group for the development of new methods for diagnosing human diseases at the Central Research Institute of Epidemiology of Rospotrebnadzor, this dramatically reduces the likelihood of a false negative result … He noted that the most conservative regions were chosen as the regions of the genome to be determined. So, we are talking about a region of the SARS-CoV-2 polyprotein gene, as well as one of the surface protein genes.

At the moment, the tests are at the stage of implementation into production. After the specialists make sure that the release of the kit of reagents is possible on an industrial scale, tests will be carried out. Then the documents for registration will be transferred to Roszdravnadzor.

Earlier, the head of the Federal Medical and Biological Agency (FMBA) Veronika Skvortsova said that the World Health Organization (WHO) recommended using the Russian test system AmpliTest for COVID- 19. It is capable of detecting coronavirus RNA even during the incubation period and in asymptomatic carriers. It was registered in July this year.