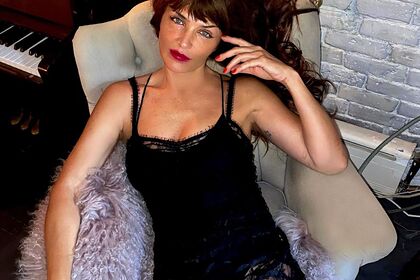 Danish supermodel Helena Christensen starred in frank outfits (Helena for social networks and delighted fans with her youth. The corresponding series of shots and user comments appeared on Instagram.

For the new shoot, the 52-year-old celebrity chose two looks: a black slip dress made of transparent lace fabric and a white shirt, which she wore on her naked body. So, in one of the pictures, Christensen poses in a velvet chair, and in others, she is captured in full growth against the background of paintings. “Vintage and secondhand”, – she signed the post, which at the time of publication has collected more than 15 thousand likes.

In the comments under the post, fans admired the youth of the fashion model. “Beautiful and elegant! Helena, you look better now than you ever have in your life. ”“ In a sea of ​​stars with botox and pumped lips, you seem like a breath of fresh air. Stunning natural beauty. And I love your hair! ”,“ We ​​see not only your outer, but also your inner beauty, Helena, ”they said.

In October, Helena Christensen starred in a candid photo shoot for the cover of the Scandinavian version of the fashion magazine Vogue … So, in one of the photos, she posed in a striped sweater without pants, holding a dog in her hands, and in the second – in a lace bodysuit near the wall with paintings. The model was also photographed topless in coral trousers.