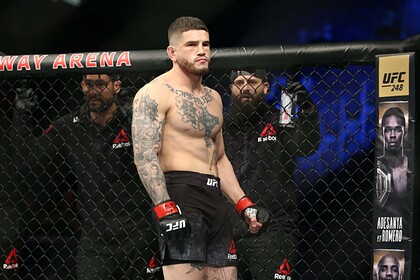 Former mixed style fighter (MMA) rivals of the Swede of Chechen origin Khamzat Chimaev. The full version of the video is available on Sonnen's YouTube channel.

The 44-year-old expert admitted that he was impressed by American Sean Brady's performance at the Ultimate Fighting Championship (UFC) tournament, where he defeated Michael Chiesa in the welterweight division … According to Sonnen, the athlete has rare strength and power for his weight.

“I have rarely met people who are stronger than you, so that it is discouraging. In fact, only twice in a lifetime. One of them is Georges Saint-Pierre, ”said Sonnen. He drew attention to the fact that after the victory, Brady did not name the opponent with whom he would like to fight next. According to the expert, Brady did not expect success from himself in the duel with Chiesa. However, later the American challenged Chimaev to the battle. Sonnen is convinced that this is the perfect match.

Chimaev has won four victories in the UFC. He spent three fights in 66 days, which became a record for the organization. Chimaev has repeatedly challenged the stars of the promotion. One of the fighters who expressed interest in fighting the Chechen is Neil Magni.

Brady has never lost in fights according to the MMA rules. On account of his streak of 15 wins.