In Australia, they planned to shoot 300 kangaroos to free up space for the construction site at no cost 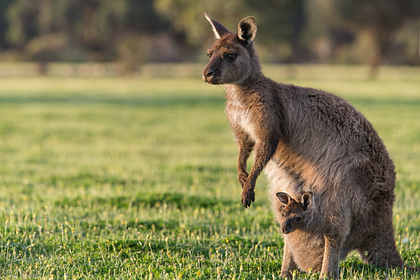 construction costs. The city council proposed to shoot 300 kangaroos to make room for a new road and a sports complex, writes DailyMail.

A population of hundreds of gray kangaroos lives in an area of ​​67 hectares. Based on the results of the environmental expertise, the municipal authorities decided not to relocate the animals – the procedure will take too long, and the movement of each individual will cost 1.6 thousand dollars.

Solving the problem with tranquilizers is unprofitable – then it will be impossible to sell animal meat from – for the presence of chemicals in it. Experts do not recommend sterilization, and poisoning is considered too cruel and illegal. The document concluded that the best way to get rid of the kangaroos is to shoot them. Killing one animal will cost only $ 30.

Kangaroos often live near residential or industrial areas and can pose a danger to people – to carry diseases, provoke accidents on the roadway. If the draft document is approved, most of the territory will be given for construction work, and a piece of 22 hectares will be left for the animals. However, the authorities will first have to agree on the extermination of the population with the local Department of Biodiversity, Conservation and Attractions (DBCA).

In early October, climatologists offered the Irish to kill 1.3 million cows in order to fulfill obligations to reduce emissions of a powerful greenhouse gas methane. Analysts attributed the need for radical measures to the too high level of emissions from agriculture – annually it accounts for 35 percent of emissions in Ireland.