Doctor Popov: a case of “black mold” affecting eyesight was recorded in Russia 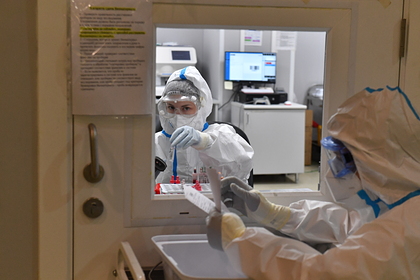 Radiologist, PhD in Medicine and Head of the Department of Radiology in the Ilyinsky hospital in the Moscow region, Pavel Popov warned of the appearance in Russia of cases of a new consequence of the coronavirus – mucormycosis. The doctor told about this on his Facebook page.

Mucormycosis or “black mold” – a disease due to which COVID-19 patients in India lost their sight – was recorded in one of Popov's patients. As evidence, he attached X-rays to the post.

According to the doctor, two months after the coronavirus, a St. Petersburg woman noticed a small painless lump in the left side of her nose. “In addition, the left eye stopped seeing, and lacrimation appeared. In the area of ​​the forehead and cheekbones, tingling, unpleasant sensations began to disturb, “the doctor described the symptoms.

In the hospital, the patient underwent CT and MRI of the paranasal sinuses, as a result of which they discovered “a widespread pathological process in the form of multiple confluent soft tissue infiltrates (accumulation of cellular elements in the tissues of the body with an admixture of blood and lymph – approx.” Lenta.ru “), causing destruction of the bones of the facial skull, the base of the skull, the frontal bone. ”

Some of Popov's colleagues write under the post that they do not receive patients with such a postcoid complication. And the doctor from Samara, in turn, claims that they already have more than ten such cases. “Everyone has diabetes,” he clarified in a commentary.

According to Popov, the main reason for this effect is the uncontrolled use of antibiotics and corticosteroids. They lead to suppression of immunity and, as a result, infection with conditionally pathogenic fungi.

The first cases of “black mold” in Russia became known in the summer of 2021. Then only two patients with mucormycosis were reported. According to Alexander Gorelov, deputy director for scientific work of the Central Research Institute of Epidemiology of Rospotrebnadzor, the threat of the spread of the disease was minimal.