Navy Vice Admiral Borisov: NATO submarines have nothing to do with the death of the Kursk 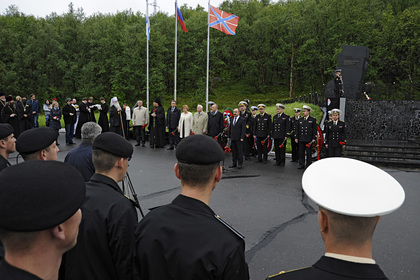 appointment, vice-admiral of the reserve of the Russian Navy, doctor of technical sciences, professor Tengiz Borisov told “Lente.ru” that NATO submarines have nothing in common with the death of “Kursk”. Earlier, the ex-commander of the Northern Fleet, Admiral Vyacheslav Popov, reiterated this version of the disaster that occurred on August 12, 2000 during an exercise in the Barents Sea.

He also disagreed with Popov's statement that the submarine” nodded. ”

“The boat, after the first explosion, continued to go in a straight line at the same depth, and only after the second catastrophic explosion did it dive down, because the boat sank with the pull-out devices raised. If the boat had started to dive right after the bow was damaged and the first compartment began to flood, the automatics would have worked and the retractable devices would have sank to a depth of about 25-20 meters, “Borisov explained.

In his opinion, not and Popov's thesis that the NATO submarine, which the Kursk allegedly collided with, was lying nearby and emitting an SOS signal with knocks, as the American submarines, as well as the Russian ones, do not have such devices.

I would not attach any importance to what Popov said at all. This is intended for ordinary people, people who are very far from the submarine fleet and do not understand anything about this. He says a lot of things that are far-fetched, to put it mildly

Tengiz Borisov, former chairman of the Special Purpose Underwater Work Committee, Vice Admiral of the Reserve of the Russian Navy

we are really not brilliant, probably one of the worst in recent years, so he apparently decided to seize the moment and blame everything on the Americans, “Borisov summed up.

118 sailors were killed in the Kursk crash … According to a report by the Prosecutor General's Office, the cause of the disaster was a torpedo explosion caused by a leak of fuel components. The version presented by Admiral Popov about a possible collision of the Kursk with a foreign submarine was put forward by him in November 2000, three months after the death of the submarine, but no confirmation was found. During the investigation, Popov continued to command the Northern Fleet and was removed from office only on December 1, 2001 with the wording “for serious omissions in organizing the fleet's daily and combat training activities.”