Senator Klimov: the conflict between Ukraine and the Russian Federation is explained by the American doctrine of overvoltage 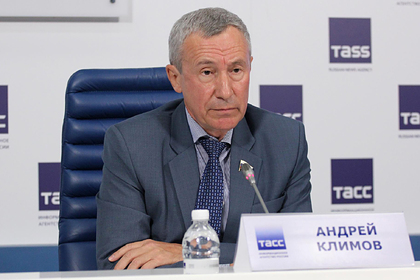 on overvoltage “, developed by the United States, said a member of the Federation Council Andrei Klimov. In a conversation with Lenta.ru, the senator explained that the doctrine presupposes an increase in tension along all borders of the Russian Federation, and the Ukrainian direction is considered the most effective within its framework.

Earlier, Bloomberg, citing intelligence sources, wrote that in 2022 Russia will attack Ukraine from three sides. The United States claims that most of the Russian tactical groups are already in their positions. In turn, the Russian Foreign Intelligence Service said that the US State Department was spreading false information. The SVR also noted that “Washington officials” deliberately intimidate Moscow's alleged preparations for an attack on Kiev, but in reality the Russian side has no such plans.

Klimov called this SVR statement “very timely and correct”, because, according to him, the same idea has to be regularly explained to international partners. He noted that Russia is trying with all its might to keep the peace, but it is deliberately provoked into a conflict with Ukraine.

“Several years ago, the United States developed a doctrine called“ Overstrain of Russia, ”that is, on how to make our country overstrain and weaken. This doctrine presupposes an increase in tensions along the entire perimeter of our borders. You can recall what regularly happens in the Caucasus, around Belarus, in Afghanistan, Central Asia – all this shows that the system is being developed quite seriously, they don’t spare money for it, ”Klimov said.

The most effective, according to the senator, within the framework of this doctrine, is the Ukrainian direction. The problem is that Russia, as the politician stressed, is making every possible effort to implement the Minsk agreements, it is not interested in the conflict. Therefore, the Americans are trying to increase the level of confrontation in Donbass with the hands of Ukrainians.

“They want to do it with the hands of Ukrainian hawks, ordinary servicemen, quasi-legal armed organizations. To do this, they are given weapons, trainings are conducted, and propaganda support is carried out, including fictions about the Russian threat and the country's aggressiveness. We are constantly explaining this to our foreign partners. It is important to understand: it is precisely the American and British military personnel, the military personnel of the NATO countries who are on the territory of Ukraine with their weapons. Once again: this is not their territory, not even NATO's territory. And our units remain exclusively within the state borders. Where exactly they are located and in what quantity – we decide for ourselves, “Klimov emphasized.

The senator recalled that the Ukrainian region is constantly being pumped up with weapons, militants and military units. When Russian military specialists and diplomats see an increase in the concentration of military equipment near the border, they cannot help but react and raise their attention.

“The region poses a direct threat to Russia because of this pumping. The spread of fakes, in turn, helps the US State Department and their junior partners in NATO countries to blind the formidable image of Russia and the high level of threat that comes from it, “the politician concluded.