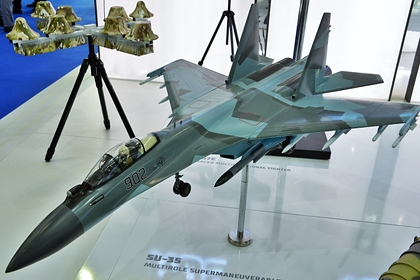 Russian Su-35 fighter received three radars with active phased array antenna (AFAR). This will allow him to detect stealth aircraft. The Military Watch drew attention to the layout of the additional radar antennas.

Additional radars of the Su-35 fighter were found on the poster of the Ryazan Instrument Plant. The illustration depicts an airborne multifunctional interrogator with an active phased array. The publication noted that the wing-edge devices are full-fledged AFAR radars.

The author of the material notes that long-wave radars can detect subtle targets. This is due to the peculiarities of technologies for reducing radar signature, which scatter radiation from X-band stations.

Antenna systems H036L-1-01 in the edges of the wings are used in the radar station H036 “Belka”. This system was received by the fifth generation Su-57 fighter. The Su-35 is equipped with the N035 Irbis radar.

In October, The Drive reported on the preparation of a training battle between the American F-15E Eagle and Russian-developed Su-30MKI fighters. A mock battle with the participation of Japanese and Indian pilots will help to better understand the tactics of using Russian aircraft.

In August, The National Interest wrote about the advantages of the Su-35 fighter. The publication noted the engine and maneuverability of the aircraft. The author of the article clarified that the N035 Irbis radar cannot be considered modern.