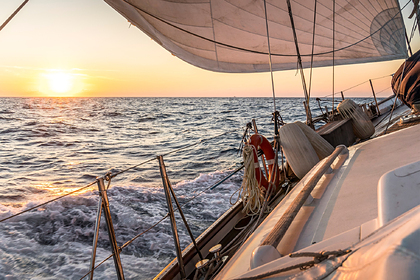 A Russian family from Novosibirsk was stuck on a yacht in the open ocean while traveling around the world due to covid restrictions. The son of the navigator Fyodor Konyukhov spoke about this in an interview with Lente.ru.

So, according to Oskar Konyukhov, the Klochkov family has been on an autonomous voyage for more than 70 days, since no country wants to accept their boat for security reasons. “They were not accepted by New Zealand, they were not accepted by the Cook Islands, now they came to Christmas Island, but everywhere there was a refusal,” the speaker specified.

As the source noted, the situation is complicated by the fact that there are two children on board, travelers are running out of fresh water supplies, there is no fresh food, and the yacht needs repairs. “Just imagine, 77 days of autonomous sailing on freeze-dried products. The fresh ones have long run out. You can be in autonomous navigation for a year, but they did not plan this, they planned to go to the islands and replenish supplies, “explained Konyukhov.

He added that the Klochkovs tried to explain their situation to the authorities and even asked that the coastal services give them food, they were ready to pay for this service, but they were still refused. “Australia, New Zealand are somehow strongly reinsured due to the coronavirus. The Klochkovs tried to explain to the authorities on the shore that they had been in the ocean for 77 days and were neither carriers nor sick. They are cleaner and safer than those on the shore. But for these countries, the letter of the law is more expensive. This is a blatant disgrace, “the speaker commented on the situation.

At the same time, Konyukhov clarified that the family is now heading to French Polynesia in the hope that they will be accepted at least there. According to him, it will take about two weeks to go to the country on a yacht, and by the time the Klochkovs arrive there, they will be sailing autonomously for about 90 days.

The Klochkov family is making a round-the-world trip on the Lady Mary yacht with 2018 year. There are four crew members on board – captain Andrey Klochkov, his wife and senior assistant Marina Klochkova, their daughter and senior sailor Anastasia Klochkova, and 10-year-old cabin boy Lada Klochkova. For three years, the travelers managed to pass Cape Horn, Antarctica, Point Nemo and the Cape of Good Hope. The fifth stage of their expedition was supposed to end in December 2020, but due to the coronavirus pandemic, they had to stay in Western Australia for a year.