Polish Prime Minister Morawiecki: inflation in Europe has come because of Russia 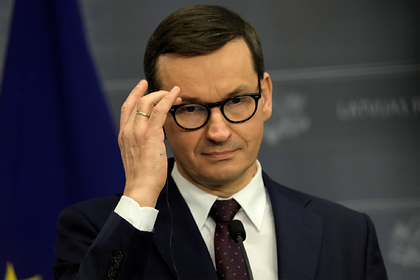 Polish Prime Minister Mateusz Morawiecki said Europe came because of the actions of the Russian energy company Gazprom and the Russian authorities, as well as because of the construction of the Nord Stream 2 gas pipeline. His words are reported by RIA Novosti.

According to Eurostat, annual inflation in the eurozone in October rose to a record 4.1 percent for the first time since July 2008. A month earlier, the figure was 3.4 percent. Moravetsky explained that such a strong inflation in European countries was caused by the rise in prices for energy resources, in particular gas, and accused the Russian supplier Gazprom of inflating prices.

“Today we are faced with a situation where in most European countries inflation is historically high compared to the last 20-30 years. And Gazprom and Russia are responsible for the high energy prices. Nord Stream 2 answers, those in the European People's Party answer, who not only did not block Nord Stream 2, but contributed to the construction of this northern gas pipeline, which today is an element of blackmail in the hands of President Putin, “Moravetsky said./p>

At the beginning of autumn, gas prices rose sharply in Europe – at the beginning of October, the cost of fuel was approaching two thousand dollars. The energy crisis unfolded due to the low level of occupancy of European storage facilities, reduced supply of major suppliers and high demand for gas in Asian countries. At the time of writing, gas futures are trading at $ 994, according to London-based ICE data.