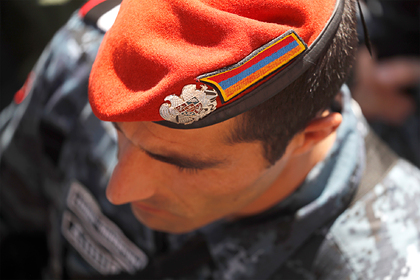 In Yerevan, the police prevented a showdown of thieves in law. “Sputnik Armenia” reports this.

39-year-old Vardkes Ispiryan, 37-year-old Armen Harutyunyan, known as Armenchik Massivsky, and 35-year-old Artur Pokaryan (Rouge Arturik) were arrested. A Makarov pistol with six rounds was found with the detainees. The criminal authorities came to a showdown with another thief in law Andranik Soghoyan, known as Zap, and his associate.

All three were taken to the General Directorate of the Armenian Police. It is noted that Zap himself and his accomplice were also detained by law enforcement officers.

Andranik Sogoyan was born in 1968 in the city of Gyumri, where he was crowned in 1994. He was active in southern Russia and Ukraine. He was repeatedly detained by law enforcement officers in Sochi and Odessa. In 2010 he was detained in Prague on suspicion of organizing the murder of an Armenian businessman. He is currently on the wanted list at the request of the Czech Republic.

On February 25, it was reported that a court in Armenia ruled to terminate the criminal prosecution of Andranik Sogoyan due to the lack of authority of the crime and sufficient evidence in the actions. He was charged under part 2 of Article 223.2 of the Criminal Code of Armenia (“Participation in a criminal community”), which provides for imprisonment for a term of six to ten years.