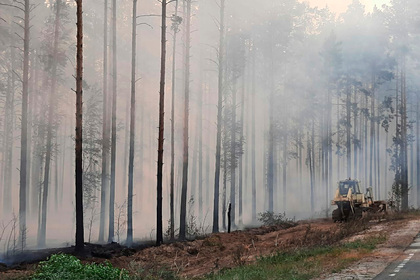 The strategy of socio-economic development of Russia with a low level of greenhouse gas emissions until 2050 is still difficult to call a strategy, said Georgy Safonov, director of the HSE Environmental Center, in a conversation with Lenta.ru. The expert commented on the document that the Russian government approved at the end of October: the rescue plan should provide the country with a stable future and save it from the effects of climate change.

“This is not a strategy at all, this is some line of how to develop”, – explained the specialist. In his opinion, the rate on the growth of the absorptive capacity of forests deserves a critical assessment: it is assumed that it should approximately double compared with the indicators of 2019, up to 1200 million tons of carbon dioxide equivalent.

However, in Russia there is an acute problem of forest fires, and the burning of forests in itself also leads to emissions into the atmosphere. “Forests are a risky asset, they burn, a lot has burned down this year. There are so many forests burned out in the world that it is more than the whole absorption. In Russia, more than a billion tons “flew out”, and our forest absorbs about 600 million a year, “Safonov explained.

In addition, fires are not the only problem of forests, and practice shows that relying only on their absorbing capacity is unproductive, the specialist noted. As proof, he cited the unfortunate experience of Canada: the country, having ratified the Kyoto Protocol, intended to fulfill its obligations to reduce emissions just at the expense of forests. However, after a few years it became clear that one more threat was not taken into account – pests, and the plans failed. “We want to protect our model with forests, and forests are under threat,” Safonov concluded.

He also pointed out that now Russia is actively exporting products “dirty” from an environmental point of view, and in the future the demand for them will fall. A more active transition to a green economy is needed now, however, regulatory measures are needed much more stringent: companies must have specific obligations, the specialist explained.

Safonov also believes that the current indicators in the field of rational use of energy, which is also important for reducing emissions, do not inspire optimism. “Our energy efficiency program, one might say, has failed, and the law and the presidential decree on 40 percent increase in energy efficiency by 2020 compared to 2007, and the federal and regional programs, all have failed. At best we have reached not 40, but 12 percent, ”explained the director of the HSE Environmental Center.

The current version of the strategy is rather a concept that will require revision towards strengthening in five to ten years, agrees Alexey Kokorin, director of the climate program of the World Wildlife Fund (WWF). “It’s rather a sketch for the future, it is made very conservatively, very close to practice,” the specialist noted. Estimates about the absorptive capacity from natural resources, in his opinion, are realistic only on condition of significant investments. “This requires simple measures, but over a vast territory. It's expensive, “he said.

However, the final version of the document looks, moreover, more appropriate than earlier versions, pointed out the head of the Energy Efficiency Center – XXI Century Igor Bashmakov (the center prepared the calculations used to develop the strategy). The current tasks for increasing the absorptive capacity of forests are also very difficult to fulfill, but now the strategy, in any case, has goals to reduce emissions in various sectors of the economy, the specialist explained. Initially, he said, the emphasis was solely on the contribution of forests, and the targets were “fantastic”. “According to my estimates, the area of ​​forest land would need to be doubled, for this it would be necessary to evict all Russians to other countries,” the specialist noted. Ultimately, the situation changed, “the government began to look the other way.” At the end of October, the government approved a strategy for the socio-economic development of Russia while reducing greenhouse gas emissions until 2050. The main development scenario outlined in the document will have to ensure Russia's competitiveness in international markets and sustainable economic growth – at a rate higher than the world average, up to three percent per year. Implementation of the strategy will require investments of about one percent of GDP in 2020-2030 and up to 1.5-2 percent of GDP in 2031-2050. By 2050, emissions should be reduced by 80 percent from 1990 levels, and Russia should come to carbon neutrality by 2060. The strategy does not contain a specific plan, it will be developed within six months.