Fans criticized Olga Buzova for excessive retouching on the photo 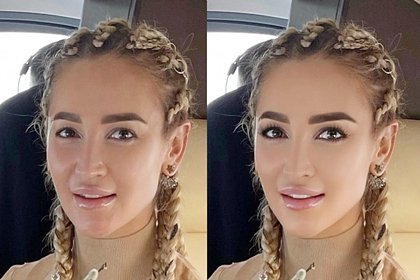 Russian singer and presenter Olga Buzova showed her appearance before and after using Photoshop fans. The post appeared on her Instagram page.

The 35-year-old celebrity shared a collage of two photos. In the first frame, she is captured without makeup with her hair braided in braids, and in the second, the TV star showed how her face is changing with the retouching of the Persona app. The picture shows that her face smoothed out and a make-up appeared on her eyes. Thus, the pop singer advertised the program for the gadget.

Subscribers criticized Buzova for excessive photoshop in the comments under the published picture, which scored almost 10 thousand likes. “Damn it, but we thought you were beautiful”, “That's why we can't recognize you”, “So that's why you are always beautiful on social networks, and not in real life”, “How do boys now look for a bride-wife?”, “Olya's secret revealed” – the fans spoke.

In November, netizens did not recognize Olga Buzova in the new photo. The singer starred in an evening dress of maxi length in black with a bright make-up and red lipstick on her lips. Users noticed the changes in the presenter's appearance, which they began to write about in numerous comments.