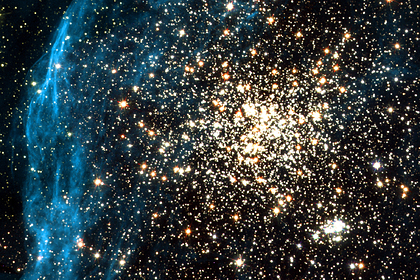 An international team of astronomers reports the discovery of a black hole in the globular cluster NGC 1850. This object, which is part of a binary system, belongs to stellar mass black holes and is about 11 times more massive than the Sun. Details of the discovery are available in the arXiv.org preprint repository.

To date, scientists have reported only a few direct detections of black holes that are found in binary systems within star clusters. Such black holes look like an invisible object around which a large star revolves. Moreover, no direct dynamic detection of a black hole in a young massive cluster has been reported so far. The discovery of such objects could be critical for understanding the early dynamic evolution of black holes in high-density environments.

The object, designated NGC 1850 BH1, was discovered in NGC 1850 – young (about 100 million years old) and massive (with a mass of about 100 thousand solar masses) globular cluster in the Large Magellanic Cloud. It consists of a black hole and a main sequence star, which is about 4.9 times more massive than the Sun. The orbital period is 5.04 days and the orbital inclination is 38 degrees.

In the future, the star is expected to turn into a giant, which will lead to the transfer of matter from it to the black hole and the emergence of X-rays. The mass transfer is likely to end when most of the donor star's hydrogen envelope is transferred to the companion, and the core of the helium star remains. In the end, there will be a black hole-white dwarf pair.