In Krasnodar, within the framework of the ART-week festival, a sculpture of a chameleon made of garbage appeared 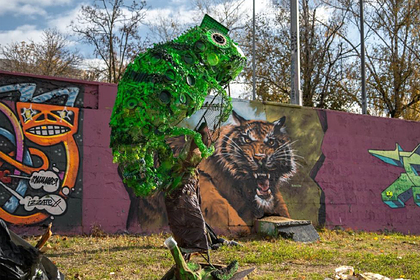 A sculpture from plastic and metal waste in the form of a chameleon. “Kubanskie Novosti” writes about this.

The members of the Stena Club creative studio were involved in the creation and installation of the art object. It is clarified that the chameleon was made from garbage collected during an environmental campaign within the framework of the ART Week festival.

According to the organizers, they decided to turn the format of an ordinary subbotnik into an act of art. Why Art Object Chameleon? The chameleon is a lizard that will never live in a polluted environment. We wish everyone to create and preserve a clean “environment” around them, “the Youth Center for Personality Development explained in its Instagram account.

Earlier in November, a new art object appeared in the Kirov Park in Izhevsk on sports theme – a bronze sculpture in the form of a young man holding a racket in his hands. At the foot of the monument is a quote from the American tennis player, the first ever Grand Slam winner Don Budge: “When the game is no longer fun, cut the strings from your racket.”