Oreshkin told about the new forecast for inflation in 2019

SOCHI, February 14 — RIA Novosti. The updated forecast of the RF Ministry of economic development of inflation for 2019 will be higher than the current 4.3 percent, but less than 5%, told journalists the head of the Ministry Maxim Oreshkin on the sidelines of a Russian investment forum in Sochi. 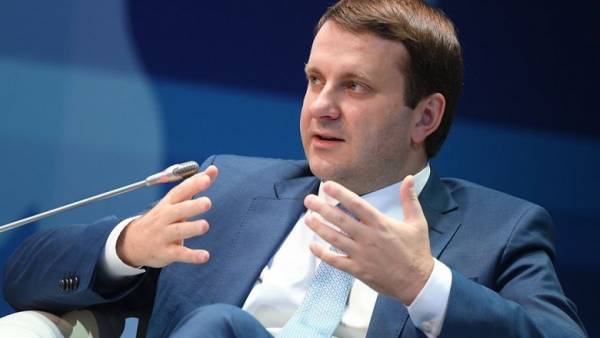 The official forecast the MAYOR comes from the fact that inflation in Russia by the end of 2019 will amount to 4.3%.

“We’re all the indicators should be clarified. Of course, something may change,” said Oreshkin. He also replied affirmatively to the question of whether the inflation expectation increased to 4.3%, but will remain below 5%.

On Tuesday, the Ministry of economic development published the report “the economy”, which indicated that inflation in Russia will pass its peak in the 5.5 to 5.7% in March-may, and by the end of the current year while maintaining a stable exchange rate will fall below 5%.

… Previously announced that the Ministry will present in mid-February, the Outlook for key indicators, including inflation, economic growth, to begin work on the budget for 2020 and the planned period of 2021-2022 years.

Russian investment forum held in Sochi on February 14-15. MIA “Russia today” is the General information partner of the forum.