The American campaign against a new pipeline from Russia to Germany has strengthened the core of the founders of the EU. 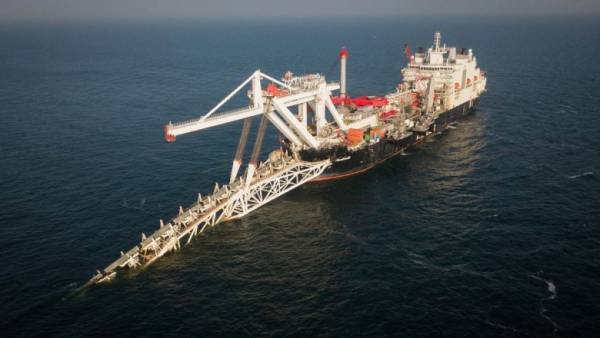 8 February 2019 will go down in history as a day of bonding “Holy Alliance” of European Empire. Bonds, which in the spirit of modernity was not fashioned blood-and-modern — natural gas. Berlin and Paris, who for two weeks before it was signed in German Aachen, a new agreement on “eternal friendship and cooperation”, and then suddenly publicly “quarreled” on the question of the fate of the “Nord stream — 2”. And then quickly “made up.”

As a result, Germany retained its status and powers “negotiator” project from the European side, France has shown itself radetelnitsa interests of the Eastern outskirts of the EU, which the US uses to promote its own agenda in Europe.

Briefly review the chronology of events. In November 2017, the year the European Commission at the initiative of Poland proposed amendments to the Gas Directive of 2009, popularly known as the “third energy package”. Their essence is to extend its requirements (separation of transmission infrastructure by activity, non-discriminatory access to capacity for transport, tariff regulation, etc.) on the pipelines that connect the network to the EU gas pipeline on the territory of third countries, primarily the countries-exporters of gas.

The meaning was to create risks for the project “Nord stream — 2” and to obstruct its construction or operation.

The amendments received a negative opinion from the legal services of the European Commission and the Council of the EU due to the obvious redundancy and potential conflicts with international law. A gas pipeline Interconnector with a third country, by definition, starts outside the jurisdiction of the EU, and ends at the point of gas supply to the European system. And if on land you can almost make a point of putting directly on the physical boundary, although it is never done, in the case of sea gas pipelines is technically not practicable.

Poll: 73% of the population of Germany supported the project “Northern stream — 2”

Accordingly, the question of the extension of the rules of the EU internal market for indivisible object infrastructure, which starts in Russia, where it is subject to Russian legislation, is laid on the seabed in accordance with international law, and only 12 miles from the coast of Germany (in the territorial sea) formally is in the EU. However, it is clear that to provide free “third party access” and other pleasures of the “third package” on the seabed is physically impossible. And no one wants it, if only to prevent the implementation of the project.

Who is trying to thwart the plans of continental Western Europe on the construction of a direct gas pipeline from Russia to guarantee its current and future needs in natural gas it was already an open secret.

And for the last time all the masks were dropped. Washington has openly accused Germany that it supposedly is energy a hostage of Russia.

American officials and diplomats romp through Europe to block the construction of “Nord stream — 2”. Ambassadors of the United States in violation of office etiquette and ethics in a Facebook post open calls and send European energy corporations letters with threats of sanctions for the participation in the gas pipeline project. Moreover, the set of arguments and tools has undergone little change since the cold war, when Washington demanded from the Europeans to abandon the construction of the gas pipeline “Urengoy-Pomary-Uzhgorod”.

For 2018 in the European Union was chaired by Bulgaria and Austria. Both countries are interested in the development of gas cooperation with Russia. So the work on amendments to the Gas Directive was at the working level, but a political movement they were not given. Although the European Parliament known for his Pro-American positions, in the spring of last year “in absentia” supported the adoption of the amendments. And in December 2018 the European parliamentarians after the U.S. Congress issued a resolution against the “Nord stream — 2”, adopted its own Declaration against the pipeline.