Russia is building the route for the whole world. It is not a pity trillion

All the way through. 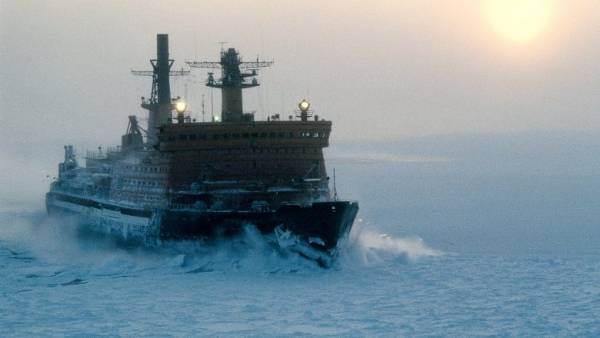 On the development and support of the Northern sea route (NSR), the world’s shortest navigable route from Europe to Asia, Russia plans in the next five years to spend a lot of money — almost a trillion. Despite tremendous potential, Northern sea route still remains inefficient and unclaimed artery. Promoting it is one of the priority tasks set by President Vladimir Putin in the framework of the may decrees. Will it have Russia to reform the international transport system by multibillion-dollar injections — in the material “Tape.ru”.

Rosmorrechflot presented for discussion the schedule of the implementation of the decree of President Vladimir Putin to increase by 2024 turnover of SMP to 80 million tons per year. According to calculations of the Ministry, it will take 905,6 billion. Of them 305 billion should be allocated state, the rest will fall in to 600.6 billion extra-budgetary funding.

So, in the event of “Rosatom”, which is assigned to the infrastructure operator to SMEs in the next five years will require of 173.7 billion rubles in the event of Rosmorrechflot — 226,5 billion. In 235,9 billion cost of the connection of the Northern and Sverdlovsk Railways and the output of the transportation system to NSW. Even 169,6 billion rubles will be spent on the activities of the Federal program “Sea ports”.

For the period from 2019 to 2024 planned including the construction of a multifunctional emergency rescue, hydrographic and lockmasters of vessels, transshipment of LNG in the Murmansk region, the terminal in the North Bay for shipment piaski oil, coal terminal “the Seagull” in port Dickson and the reloading of the LNG facility on the Kamchatka Peninsula.

However, the final decision on the document yet. All the relevant agencies — Ministry of economic development, the Ministry of transport, Ministry of energy and Rosatom — got it for review. And while the achievement rate in the amount of 80 thousand tons have repeatedly questioned, the consistent development of the Northern sea route holds great promise.

The Arctic zone occupies a special place in the Russian economy. Here is about 20 per cent of the gross domestic product and provides more than a quarter of its exports. In the Arctic is the main mineral resource base — there are already mined and produced 95 percent of the Russian Nickel and cobalt, more than 80 percent gas, 25 percent oil and 60 percent copper. Total investment in projects for the development of raw material base and logistic potential of the Arctic until 2050 is estimated at 13.5 trillion rubles. While 5.5 trillion needs to be spent by 2024.

In this regard, the Northern sea route, connecting the ports of the European and far Eastern coasts is essential. The head of “NOVATEK” Leonid Mikhelson earlier said that SMP will significantly reduce the cost of transporting liquefied natural gas (LNG). In addition, it will reduce the delivery of gas to Asia from 36 to 19 days.