MOSCOW, 10 Feb — RIA Novosti. The delegation of the “new Church” of Ukraine, headed by Bishop Paul Uristem not allowed on the territory of the piously-Panteleimonov monastery on mount Athos, this publication reports Romfea.gr. 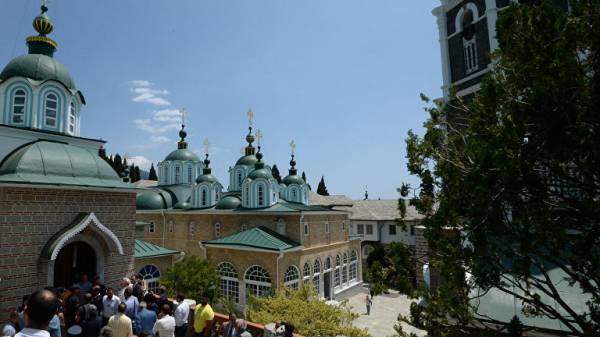 The monastery’s Abbot, Archimandrite Evlogy, closed the gates of the monastery before the representatives of the “new Church” of Ukraine, not allowing them to enter the Church and venerate the relics. As explained by the Ukrainian delegation Eulogy, in this monastery, they are not recognized by the priests, both now and in the future.

Earlier media reported that more than half the monasteries of mount Athos opposed the participation in the “enthronement” of the Chapter “new Church” of the Epiphany of Ukraine Dumenko. It is noted that of the twenty monasteries only seven endorsed the idea to arrive in Kyiv on February 3, 2019.

“New Church” of Ukraine was formed on the “unification Council” in December last year after the merger of two operating in the country non-canonical Church structures.

In early January of this year, Ecumenical Patriarch Bartholomew gave Kyiv the Tomos of autocephaly of the “new Church.” It imposes a number of constraints and makes it dependent on Constantinople.

In the ROC said that the day of the signing of the Tomos is tragic in the history of the Ecumenical Orthodoxy.