Snow-covered slopes, dangerous passes, and of course the famous tower. These places are beautiful any time of the year is proven by our photographer. 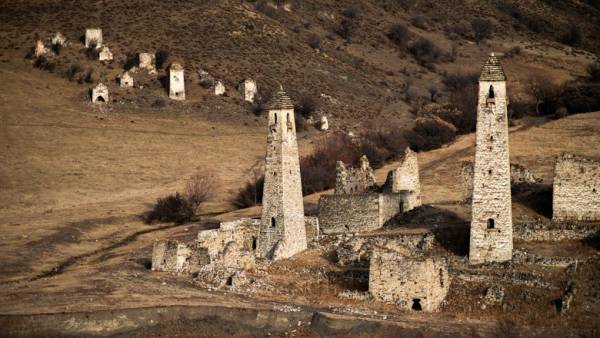 Almost any guidebook will advise you to go there in the spring: the slopes are greener, the air warmer, more picturesque valley. But from winter travel, on the contrary, will be discouraged in the first place because of the cold and snow. Photojournalist “This is the Caucasus” these little things not scared.

He went on a short trip through the mountainous Ingushetia in the cold and came to the conclusion that during the winter it is even more beautiful.

Yes, at this time there are no green slopes, lush valleys, only dried grass, rocks and some snow, and of course, the icy peaks. But the only better is a great company to majestic stone towers.

Generic tower near the village

Dzheyrakh First tower complexes occur at the border of Ingushetia and North Ossetia, near the Ingush village Dzheyrakh. In General, such complexes can be found almost all over the Caucasus: in Dagestan, Chechnya and the Georgian district of Svaneti. But in such numbers only in Ingushetia.

The next item is the tower complex Erza. One of the most famous tourist destination. Largely because of the convenient location — it is located near the Georgian military highway, near the village of Algeti. This is a stunning historical monument: a tower has been preserved to our days in excellent condition. By the way, translated from Ingush “Erzi” means “eagle”.

Moving further East and drive up to the majestic mount Tsey-Loam. Since the ancient times it was considered a sacred mountain in Ingushetia. The height above sea level is 3171 meters.

Tsey-Lonski the pass is approximately a third of the route is 20 km away and the Scenic ride between the rocks will take approximately 40 minutes.

Along the way you will meet a lot of interesting things. For example, the scenic views of the peaks Ashinskogo gorge.

The ruins of the ancient castle

Or the ruins of an ancient clan castle right at the foot of mount Tsey-Loam.

After leaving the pass, you will fall into one of the most remote parts of Ingushetia — Darginskoy basin, which is also called “the cradle of the Ingush people”. Here is located the entire stone city of the ancient highlanders. One of them — tower complex Barquinho.

This is one of the towers of the complex Barquinho. Similar fortifications were always built by members of the same genus. They were fighting and just accommodations or fulfill both functions simultaneously. Probevue tower usually was built in the 3-4 floors. On the ground kept cattle, on the second housed the hearth and bedroom above — the guest room and pantry.

This ancient Ingush city Agical — once developed and blossomed. Still there remained five battle towers, six polubiec and fifty-residential. But the highlanders almost gone. In the near the same village lives only a few people.

When in the late XVIII century in the Mountain Ingushetia there arrived the first European explorers seen so struck them that they were ready to ascribe the tower to the greatest civilizations — the Greeks or the Persians, but not Ingush: so poor and lived the highlanders in those days.

The tower and the cliff are absolutely stunning sight! Isn’t it?

The final point of the route is another of the medieval Ingush city of Targim, located on the right side of the assy river. Archaeological studies have shown that the first settlements appeared here before our era. But what we see now is the handiwork of medieval highlanders.

A bit of advice. Special cold weather at this time in the mountains there is so much to warm up is not necessary — quite enough warm sweaters and light jackets. Before leaving be sure to read the weather forecast: from-for plentiful snowfalls in the mountains, the road can overlap. Plus remember that the Dzheyrakhsky district is a border and Russian citizens will be required to have a passport.