Empress Catherine II (1729-1796), the ruler of the wise and far-sighted, ably influence public opinion — not only in word but also fashion. Leader has created a special costume language of military political propaganda. 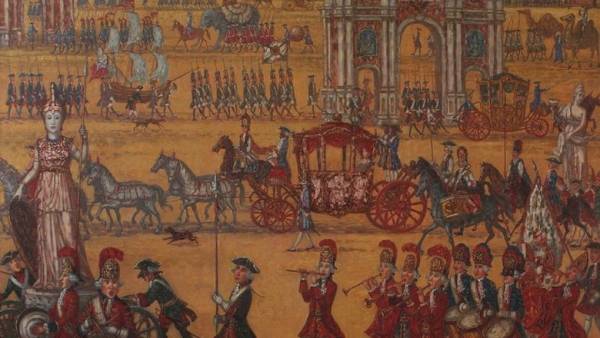 The power of this exquisite weapon, she realised for the first time in 1763, during the coronation festivities. In Moscow was arranged masquerade “Minerva Triumphant”. Three days on the streets of the mother see of played the allegorical paintings in the genre of folk comedies and booths. Jesters, clowns, barkers, Chumaky with balalaika… Catherine watched from the Windows of Betsky. Many saw her. And noted the special costume of scarlet velvet dress in the popular taste.

In that year, the appeal to national identity was important to the Queen, knew perfectly well: and the aristocracy, and the simple Russian soldiers did not approve of the innovations of Peter III. Could dislike and German origins. Because Russian celebration after the coronation, and stylized Russian costume that could not fail to please the public.

With the outbreak of the Russo-Turkish war of Catherine again tried on a Patriotic outfit. 4 April 1770, the day of the Passover, she “deign to be in a Slavic dress.” By the time the war lasted for more than a year, the Empress had expected from the troops of the new “glorious Victoria”: we had to clean Moldavia and Wallachia from the Ottoman troops, to take Bender, great hopes were pinned on the Russian fleet. And since the battles were fought largely on the territory occupied by Slavic peoples, the Empress made your Easter choice.

In this dress she kind of became the “mother” of Slavic peoples, their patroness and Protectress.

How was it? Descriptions are not detected. But the answer may be found on the obverse of the medal “Portrait series” with an embossed portrait of Princess Olga. Roundish face, soft features, a double chin, barely noticeable smile all reminiscent of Catherine II. If to take into account that the Slavic dress appeared almost simultaneously with the medal, then it is possible that it was copied from the portrait of the Princess.

Than the famous first impostor, posing as the youngest daughter of Nicholas II

In September, 1770, Catherine II Russian for the first time wearing the outfit. It consisted of a deaf and narrow in the skirt dress with long sleeves and “Moldavian”, that is, the upper swing dress is sleeveless. The cut was also due to military events. In the summer, Russian troops won a series of brilliant victories on 17 June at the tomb of Pockmarked, July 8 — at Larga, July 21 — at Cahul. On 19 August the corps of Prince Repnin took the fortress of Kealia, September 16, count Panin mastered Bender.

Catherine was proud. And she demonstrated this outfit.

New dress the Empress obviously liked it. In this she often appeared in the days of high celebration of the coronation, the order of the holidays, the New year. It with pleasure posed for artists — Johann Lampi, Fedor Rokotov, Alexander Roslin, Dmitry Levitsky. The basis of the outfit was taken by the boyar costume of the era of Tsar Alexei Mikhailovich, — that Catherine was showing respect to national traditions, Russian history, emphasized his proximity to the pre-Petrine Romanov.

The latter is particularly important: the Empress tried all ways to prove the legitimacy of his stay on the throne and to justify the perfect “good” coup.

The Russo-Turkish campaign suggested some elements of the dress. It is noticeable the proximity of the Eastern costumes, especially of Ottoman women’s coat of the XVII century that the rich ladies were trimmed with fur. Not by chance the choice of the name for the top swing dress “Moldovans”. In the years 1768-1774 the territories of Moldavia and neighbouring Wallachia turned the main military action, the word was that said, on hearing the Empress wore the Turkish-Slavic “Moldovans”, while troops Rumyantsev and Suvorov beat the Turks in Moldavia and Wallachia.

Headdress, reminiscent of the kokoshnik and Russian dress with elements of Eastern European style, Catherine the Great became the guarantor of the protection of all Slavs, their intercessor, the “Mother of the Fatherland” — her so called. Moreover, master Karl Leberecht in 1779 established the medal “In honor of Catherine II”, where the obverse was placed half-length portrait of the Empress in the Russian dress and kokoshnik and the title of “Mother of the Fatherland”.

There are, however, purely domestic reason of the affection of the Empress to Russian dress. In 1770-ies she was heavier, outfits, camisole bodices she was not. Had to change the style of uniformed dresses, to make them freer. Now the top and bottom of the dress is not too fettered movement, long swing “Moldovans” hides figure flaws and even reported to the Queen the picturesque monumentality.

The first few years of this spectacular Patriotic outfit was worn only by the Empress. In 1773 he was tried on some of the Grand Duchess. And in 1782, the Empress decided to regulate the “Russian dress” and 6 November issued a decree “On the appointment in the holidays what dress to wear personages of both sexes, with the arrival to the court.” However, it did not have detailed descriptions of the costumes, and the noble ladies were chosen to your taste and finish, and color materials.