SK is looking for top-managers “Gazprom”, one of which happens to be the husband of the sister of the Senator from KCR. 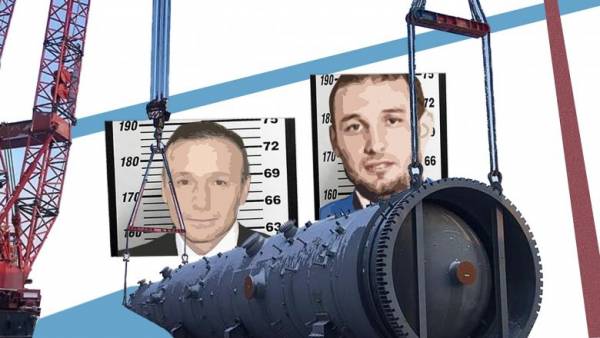 In Arshakovich were new faces. Today, 6 February, the Investigative Committee declared wanted by the two top managers of the regional structures “Gazprom” Wali Evgamukov and Umar Kalmykov. One of them is the son in law of the head of the family Areshkovich. This University master’s degree, governing the branch structure of “Gazprom”. The other is involved in ballroom dancing, owns a business in the USA and has multimillion debts on the home.

Clan Arshakovich, it seems, was not inferior to the power of the mafia Corleone family, in the corruption too. The head of the family is Raul Arashukov, whom the media called the “gas king”. He led the major structures of “Gazprom”, including the company “Mezhregiongaz Stavropol”, whose turnover of hundreds of billions of rubles. Smaller company put under the control of relatives and friends of Raul. His men were in the Investigation Committee, the son of Rauf became a Senator — a member of the Federation Council of Russia.

Family members accused of involvement in the murder, the theft of the money of “Gazprom”. According to investigators, the head of the family — Raul Arashukov through a dummy legal entities organized scheme for stealing 30 billion from corporations “Gazprom”.

Senior positions in several subsidiaries of the gas concern held close to the Raoul entity. Among them is Umar Kalmyks and the Walis of Evgamukov, which is written in this material.

Raul Arashukov gave his daughter Aisha married to Umar Kalmykov, who, according to investigators, were involved in the scheme of plunder of Gazprom’s money. Kalmykov was entrusted with the leadership of one of branches “Gazprom Mezhregiongaz Stavropol”, which was ruled by Arashukov-senior (Nevinnomyssk). To assess the scale of company was not possible, data on its revenues, not in the database of legal entities “SPARK-Interfax”.

To the leadership of Gazprom’s daughter Umarov was the CEO of a small company engaged in the production of furniture and prints Newspapers — OOO “Promkomplekt”. On its balance sheet in 2016, was 71 million rubles. The Kalmyks were also registered as individual entrepreneurs. In 2015, the IRS is required to declare him bankrupt. It hung arrears 865 thousand rubles. The arbitration court of Karachaevo-Circassian Republic refused to recognize the entrepreneur insolvent. According to the court, the Kalmyks were in the city of Cherkessk in an apartment building built in 1987 to the Soviet street.

In the news Umar also appears as the Director of “Pyatigorskgorgaz” (also the structure of “Gazprom”). However, to find evidence of this failed.

In the early 2000s, people with the given name and surname Kalmykov was held in the case of mass murder — on the night of 11 October 2004 in the country’s then-son-in-law of the President of Karachaevo-Circassia Ali kaitova of the murder of seven citizens of the Republic MP Rasul Bogatyrev and his friends. The bodies were taken to the mountains and burned in an abandoned pit. The Kalmyks were in court as one of the guards of the house Bogatyrev. This case has received in the media called “the case of kaitova”.

Kalmykova, apparently, to work in “Gazprom” were not familiar with this sector of the economy. Therefore, in 2018, they together entered the magistracy of the North-Caucasus Federal University. The couple Kalmykova studied the oil and gas business. Studied how to manage objects of extraction, transportation and storage of hydrocarbons. Now, it seems, they will not be able to graduate from high school.

Maybe it’s for the best. Kalmykova-Arashukova rich with very different talents — in 2018 she graduated from St. Petersburg Institute of cinema and television. He studied at the Department of management of social and economic processes in the film and television industry, zaochke. Prepared to “manage human resources”. This education would be useful in her main occupation is the management of the hotel “adiyuh Palace”, which is called the manor of the family Areshkovich. How to write Caucasian media, “adiyuh Palace” is a luxurious Spa hotel, 700 metres above sea level with a magnificent collection of vintage cars.

Aisha inherited the post of Director of the hotel from Arashukova Aida — wife of the main character of the Saga about Arshakovich — Rauf, the Senator, who was detained at a meeting of the Council of the Federation. By the way, Rauf had tried to leave the room, but, as he wrote RBC, the icy voice of the Chairman of the upper chamber Valentina Matvienko stopped him.

The wife of Rauf Arashukov Aida managed the hotel until 2015, now she owns it, your focus of attention, she switched to more elegant things to develop her own brand of exclusive designer clothes Araida.

This is all the more reasonable that with the hotel business Arshakovich things are not going well. For five years the hotel revenues declined, on balance by 2017, there are 25 million rubles, in 2013-m was almost 84 million.

By the way, Aida’s share of the hotel had another person involved in the case Arshakovich, he’s another son-in-law Arashukova-older — Ruslan Agaev, who was suspected of involvement in the murder.

Wali of Evgamukov until recently held the position of acting Executive Director of JSC “Budennovskaya” is a subsidiary company of “Gazprom gas Distribution Stavropol”, where the CEO was Raul Arashukov — father arrested Senator Rauf Arashukov.

As at 30 September 2015 Chairman of the Board of Directors of “Budennovskaya” was Agaev Ruslan Vasiliy. About this person we already wrote in previous articles. Full namesake of a top Manager was involved in the crime reports.

In March 2010, in Cherkessk was the leader of the youth public movement “Adyge Khasa” Aslan Zhukov. In the case of detained Rasul adzhieva. Investigators believed the motive of jealousy and a dispute over a girl. In March 2012, the court of Cherkessk has justified adzhieva.

But the relatives of the murdered activist claimed that the murder was committed by Zhukov because of his public activities, and the customer could be a politician Rauf Arashukov. Could not move from the dead point up until August 2018 acquitted Rasul Adzhiev did not come to law enforcement bodies with guilty. The man confessed to the crime and said that the customer of murder was made by Rauf Arashukov.

“Novaya Gazeta” writes that the intermediary between the politician and the killer was the Executive Director of “Stavropolis” Ruslan Agaev, the namesake of which we found the composition of the Board of Directors of JSC “Budennovskaya”.

In addition Agoeva Ruslan in 2015, the Board of Directors of JSC “Budennovskaya” was Nicholas Romanov, the first Deputy General Director of “Gazprom Gazoraspredeleniye Stavropol”. Top Manager also takes on the case of a multibillion-dollar theft in the structures of “Gazprom”.

the king of Gas of the Caucasus was stealing billions and eliminated the unwanted. His countrymen knew, but melchorita in government KCHR, dance sports and business in USA

Wali of Evgamukov — people with experience in the government of Karachay-Cherkessia. In 2004, he was elected to the National Assembly of the Republic. The man took over as Chairman of the Committee on legislation, legitimacy, local government, regional relations and national policy. After two years of Evgamukov moved to the post of Chairman of the interim administration of Abaza district. And in 2012, the head of the Republic Rashid Temrezov was appointed official to the post of Minister of culture of Karachay-Cherkess Republic.

The Ministerial seat of Evgamukov was not just. In 1984, the man graduated from the Moscow state University of culture and arts, and in the 90s the former official was engaged in dances. According to the official website of the government of KCHR, Evgamukov has repeatedly won in international Championships, which were held in Russia, Europe and the United States. Some contests Wali of Evgamukov acted in tandem with his elder son Azamat. Recording one of these performances, where a father and his son danced in sunrise, Florida we found on YouTube.

By the way, these full namesake son Evgamukov — Azamat we found in the telephone directory USA. It States that the present address of the man — state of new Jersey, city, Home, 69 pine brook road. Google street View shows that there is a small two-storey house.

In addition to the eldest son, in an American telephone directory data is the younger cousin of Amira and top Manager Evgamukov — Natalia. With her Wali of Evgamukov acted at competitions in ballroom dancing in Europe. Manager of Gazprom and the former official did not stop on the sport and decided to make his hobby a business. According to the database of companies of Florida, he owns a dance Studio in Miami.

And here at home have remained Evgamukov debts. According to the database “SPARK-Interfax” on October 1, 2018 in relation to men entered bankruptcy. Svyaz-Bank JSCB (inter-regional commercial Bank for development of telecommunications and Informatics) has demanded the former official of more than 18 million rubles. According to information posted on the website of e-justice, Evgamukov acted as guarantor to the firm OOO KFKH “Yug-Resurs”, which belongs to a certain Hazrat Urumova.

Proceedings of the bankruptcy case is not over, the next hearing is scheduled for February 11, but Evgamukov it will not come — after a man became the figurant of criminal case about plunders in the structures of “Gazprom”, he went on the run. Investigative Committee announced the top Manager and ex-official wanted.

Along with him were declared wanted Kalmykova Umar. Research suggests top managers of “Gazprom” can stay on the territory of Stavropol region. Employees of management of traffic police instructed to stop cars “Toyota Camry” and “Mercedes”. These machines move wanted.