Russians detained in Malaysia for “juggling a baby”

The couple claims that just worked with baby yoga. 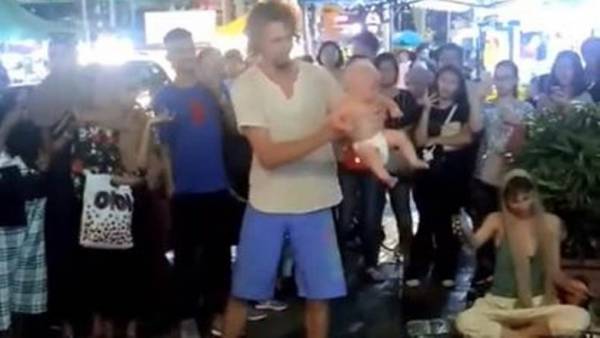 Police CUA Lumpur detained Russians Mikhail Bondaruk and Catherine Shihmanov after “communications from the public” about the unacceptable treatment of the child. Now they face a large fine or ten years imprisonment. On the eve of the Malaysian segment of the Facebook spread live street performances by the Russian duet: the man brandished a six-month baby holding his legs, and then threw the baby into the air. The Russians themselves claim that they were misunderstood — they only demonstrated “yoga for children”.

Video Russians appeared in Facebook on Saturday, February 2, the user, Zale Chia Abdullah issued a 90-second recording made in Kua Lumpur. The video shows a barefoot man of European appearance, wearing a white t-shirt and blue shorts, holding a six-month baby’s legs and rhythmically waving them to the music. Next to them sits a girl, while being watched by numerous spectators. A little later a man starts to throw baby in the air, at this moment the crowd heard cries of indignation.

In the caption to the video, Mr. Abdullah said that he believes the incident “irresponsible actions that may cause harm to the poor child,” and requests the authorities to take action.

The post quickly became popular, he scored more than 300 posts, the video itself has been viewed over 11 thousand times, then Facebook added a warning that the post “may contain a scene of violence towards the child or young person”. Most commentators have accepted the actions of the pair, saying that the man “juggling the baby.”

On Monday, the Malaysian newspaper the Star online reported that police CUA Lumpur announced the arrest of a parent with a video. “It is the Russians at the age of 28 and 27 years — said at a press conference a police spokesman, the arrest was made during their street performances after reports of citizens”. Police reportedly launched an investigation into the incident with the video. The Russians could be charged with violating the law on the rights of the child States that the punishment may be a fine of 20 thousand Malaysian ringgit (about 300 thousand roubles) or deprivation of liberty for a term up to ten years.

“B” was able to communicate with the living in Malaysia Olga Nikonova, who said that we are talking about the Russians Mikhail Bondaruk and Catherine Simonovoy. “They are wonderful people who lead an alternative lifestyle: they travel around Asia, do yoga, eat only fruit, always go barefoot, don’t use drugs in any case, — said Ms. Nikonova.— Michael is an amazing musician, his wife a painter. While traveling they are on the streets, sing Russian folk songs, very well this you earn”. According to Ms. Nikonova, a couple seriously interested in yoga — from the birth of her daughter began to engage with her “dynamic gymnastics”.

“I saw this video, and I was not myself. But the guys in conversation with me, explained that this dynamic gymnastics, children’s yoga, no harm for health is not here, — said Olga Nikonova.

— Michael and Katia were very worried that Facebook users had misunderstood them. This was not a performance for the money — they just started with baby yoga in public. Michael yesterday approached me with an offer to host me in a cafe a lecture about children’s yoga to calm the public. But was not in time. Ms. Nikonova is hoping that the police understand the incident and let the Russians: “the key to their long separated daughter. They love her very much, it is not chayut. Six months ago, they went to Bali to birth took a very well-known in the world, a midwife, a specialist in natural childbirth. Of course, they never would have caused harm”.

The Embassy of Malaysia in Russia are unable to comment on the “b” situation, and advised to contact the Russian Embassy in Malaysia. Because of the time difference, the Russian representation is not yet available for review.