NOVOSIBIRSK, February 1 — RIA Novosti. The Omsk pensioner, who did not managed to change the Soviet passport for the Russian, and later were afraid to do this because she threatened penalty, received his first document of a citizen of the Russian Federation, said on Friday the Ministry of internal Affairs in the region. 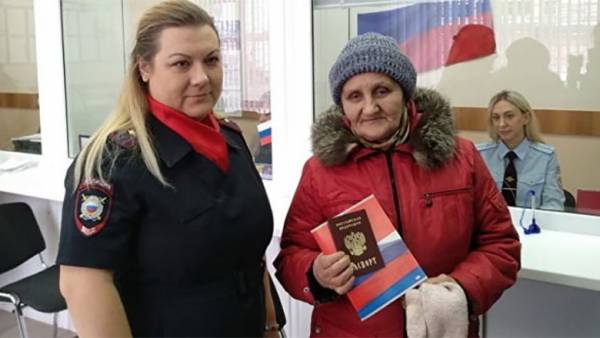 Earlier in the Chapter MIA RIA Novosti reported that the pensioner for a long time have not received a new passport because I was afraid of administrative responsibility, and money for the payment of the fine, which amounts to 3 thousand rubles, she was not. Due to the lack of passport, the woman could not draw a pension and rely on other social benefits.

she has lived for 25 years with a Soviet passport, and paid the price

“Today, in the fourth Department for migration issues of the Moi of Russia in the city Omsk 63-year-old Omichka got my first passport of the citizen of the Russian Federation. For a long time she did not dare to apply for receiving a new document to replace issued back in the USSR”, — is spoken in the message.

The police said that the history of the older women they know from regional journalists. The guards understood the difficult situation of the pensioner and helped her without penalty to replace an invalid passport. In the region for people held interagency action “Mercy”.

“A week ago, the woman handed over all the necessary documents, and today became the owner of the passport of the citizen of the Russian Federation. Now elderly Omichka will be able to put her state pension and benefits”, — noted in UMVD.