Moscow. 31 Jan. INTERFAX.RU — In Ukraine, in matters of Church life in the struggle for power is implementing a project on speculation and politicking, Russia does not interfere in the situation, but reserves the right to respond to infringement there human rights, said Russian President Vladimir Putin. 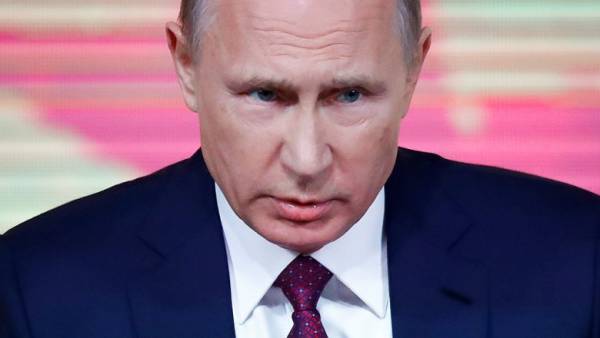 Speaking at the ceremonial act on the occasion of the 10th anniversary of the local Council of the Russian Orthodox Church and the Patriarchal enthronement, Putin drew attention to the fact that the fraternal interchurch ties have historically been United together the peoples and serve the development of equal relations of Russia with countries of the world.

But, unfortunately, we are seeing more examples where speculation, politicking, parasitizing on matters of religious life lead to the separation of people, provoke anger and intolerance. Such a project, unrelated to faith, but utterly false, tied to the struggle for power is being implemented today in Ukraine.Mr Putinprime of the Russian Federation

The President of the Russian Federation expressed regret in connection with the fact that the schism in Ukraine was involved in Constantinople. “It is regrettable that it was retracted and the Patriarchate of Constantinople. In fact, there is gross interference in Church life. The initiators seemed to learn from the atheists of the last century, which expelled the believers from the churches, hunted and persecuted clergy,” — said Putin.

The head of state stressed that the Russian authorities “I consider it absolutely unacceptable any interference in Church Affairs”. “We have respected and will respect the independence of Church life, especially in neighbouring sovereign country. However, we reserve the right to respond and to do everything possible to protect human rights, including freedom of religion,” — said the President of the Russian Federation.

15 December 2018 was held in Kyiv Unification Council, which was created by the Orthodox Church of Ukraine headed by Metropolitan Epiphany. 5 January 2019 Ecumenical Patriarch Bartholomew signed the Tomos of autocephaly ptsu, 6 Jan handed the document to Metropolitan Epiphanius.