The Mexican government ended the war against drug trafficking

Mexican authorities intend to abandon the law enforcement approach in the fight against drug traffickers and working to resolve the issue peacefully. This statement was made at a press conference on Wednesday, January 30, the President of the Latin American countries, Andres Manuel Lopez Obrador. 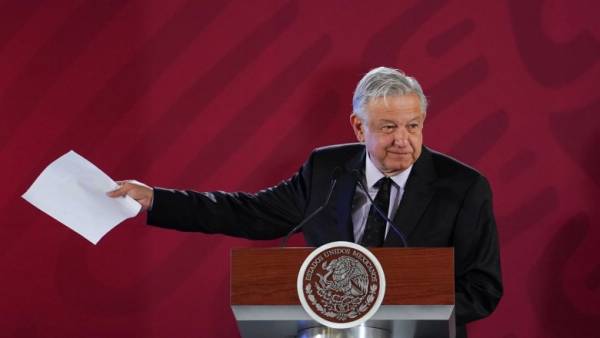 “There is no war, officially the war is no more. We want peace and we will achieve peace”, — quotes its TASS.

The head of Mexico added that the challenge for government is to ensure the safety of citizens. In this regard, the authorities refuse to “arrest the ringleaders” to reduce the number of murders and robberies.

According to the President, a new strategy in this direction is already yielding results.

To fight against drug trafficking launched by President Felipe Calderon, who led Mexico from 2006 to 2012. Over the past years in the course of this struggle has killed more than a quarter of a million people, but to improve the situation in the field of security has failed. Moreover, in recent years in Mexico, cases of violence and killings, most of which are associated with the confrontation of the drug cartels.

On 16 January it was reported about the arrest of the biggest drug Lord of Albania Clement Balili nicknamed the Albanian Escobar. He surrendered to the police after two years of searching. 46-year-old Balili is accused of organizing the smuggling of hundreds of tons of drugs, not only in Europe but around the world.